Agencies in London have gone into damage control after ongoing rumours of men rating their female colleagues’ attractiveness appeared to be true.

It follows news of the US today of a new initiative by 180 female ad executives who’ve launched The Times Up Advertising campaign to end gender inequality and discrimination.

Apparently, there’s been a long tradition at some UK agencies for departing male executives to rank female co-workers via “Top 5” and “Bottom 5” lists based on their looks.

Now one such list has surfaced and is creating the obvious shockwaves in London media circles. 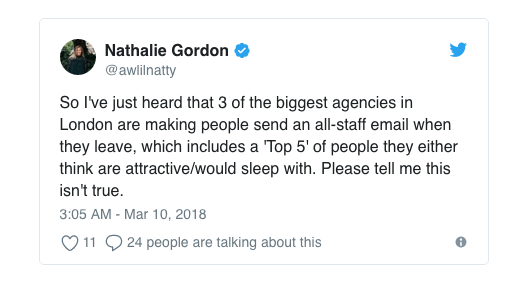 The email in question was written by Paul Martin, a planner at The&Partnership’s London office, after he quit to take up another unnamed role.

Martin’s email included such lines such as, “After watching this video, I am forever flaccid”; “You’re having a baby now and three’s a crowd. Sorry, you’re missing out”; “If you were the last girl on earth. I would use you as bait to trap a wild animal I would be happier fucking.” 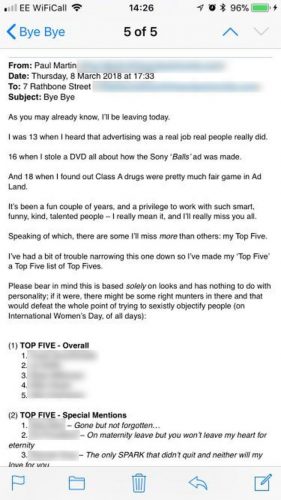 For his part, Martin said the email was intended as a joke to mock the infamous Top 5” and “Bottom 5” lists.

In an apology note to Twitter, Martin said the email was “meant to be a stupid, ironic attempt to subvert and mock the sexist ‘Top Five’ emails that have been sent around agencies for many years. I have totally missed the mark and take full responsibility.

“All the women mentioned in it are friends and people I very genuinely love and respect,” he wrote. “After checking with them to make sure they were happy to be mentioned in the email (as part of what I erroneously considered at the time a ‘joke’) I thought that was enough to validate me pressing ‘send.’ It wasn’t and should never have been.” 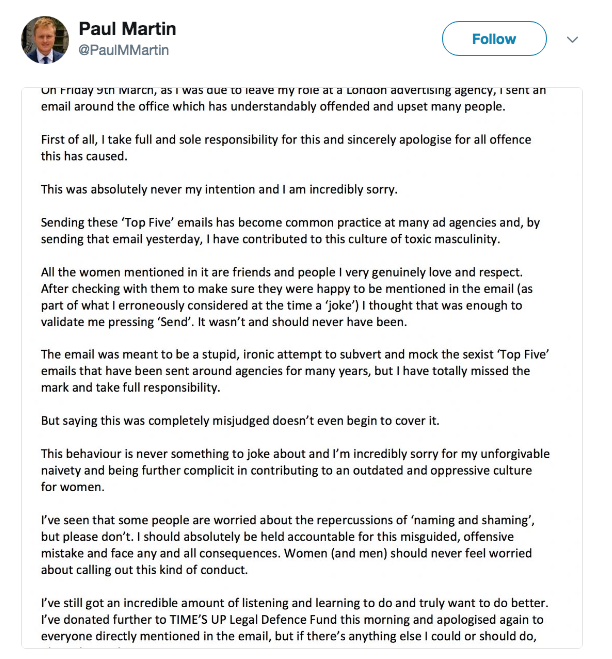 The&Partnership’s CEO Sarah Golding (main photo) issued a statement that read: “We do not condone sexism of any kind at The & Partnership London. We have apologised to our staff and others for any offence this email has caused, and we have taken action to make it clear to all employees that we will not tolerate emails of this kind being sent in the future, by men or women at this agency.”

However, US media site AdWeek is reporting that it had seen an email from Golding to the departing Martin that read: “We shall miss you Mr Martin. Thank you for everything,” it read. “Take care, Goldie.”

Golding has said she wrote her farewell note before the offending emails surfaced.

“When I received Paul’s leaving email I was out of the office attending the Women of Tomorrow awards. I replied to him with a standard thank you for your service, without reading his full message,” she said in a statement provided to Adweek. “Having done so subsequently, I immediately emailed the agency and then called the agency together to discuss both this email, and the whole premise of leavers’ emails, and have ensured nothing like this will ever happen again at The&Partnership London.

“Never have I condoned or encouraged such emails as appropriate behaviour, nor do I believe they reflect the culture of the agency,” she wrote. “Most leavers messages are gentle, warm and affectionate of colleagues and time spent here, but Paul’s went much further and shines a light on the dangers of a practice that no longer has a place in our agency or industry.”

And leading gender equality campaigner, Cindy Gallop, was quick to tweet out the whole affair.

Gallop telling UK industry website Campaign that it is “absolutely astounding” that in 2018 anybody could possibly have thought this was acceptable.

Gallop said: “The entire email stands as a huge indictment of the white male-dominated UK ad industry that has cultivated and allowed to flourish this truly disgusting industry culture of sexism, racism, misogyny, sexual harassment and objectification of women (replicated in our industry around the world), that continues to keep women out of leadership and power.

“We are not at the table because we are on the menu. This culture comes from the top. I want to see the guilt, self-examination, soul-baring and determination to change that Paul Martin is now exhibiting, take place in the industry leaders whose appalling examples made him think writing something like this was OK in the first place,” Gallop said.