The ABC has come under fire for a skit on Tom Ballard’s Tonightly program that ridiculed newly-installed prime minister Scott Morrison’s faith.

Morrison is a member of the Pentecostal faith and is said to be deeply religious.

The duo sang “you’ve got to love thy neighbour unless they vote Labor or are foreign or gay” and “we love Jesus but not refugees … if Jesus was a refugee we would say fuck off we’re full”.

It immediately drew fire across social media with many people arguing that a person’s religious beliefs were off limits and they certainly wouldn’t have done it to someone of a Muslim, Jewish or Buddhist faith.

This morning Morrison himself hit back calling the ABC “numpties”.

Asked about the skit at a press conference, the prime minister said: “The ABC can be numpties every now and then, but my faith teaches me to love each other and to turn the other cheek,” he said.

“I’m the prime minister and I work for all Australians everyday – I’m on their side. I’m about bringing Australians together, not about creating differences and pushing them apart.”

The ABC has regularly come under fire for its apparent leftist agenda and anti-Liberal/conservative sentiment.

In March, Tonightly was forced to apologise after a conservative politician was called a “c@nt” during another skit. You can read B&T’s reporting of that here.

However, an ABC spokesperson defended the segment saying that Tonightly often satirised “people in positions of authority, regardless of their race, gender or religious beliefs. Most viewers would understand the skit to be a satirical way of examining the relationship between such beliefs and government policies on asylum seekers.”

However, social media commentators were less forgiving of the taxpayer-funded broadcaster, many appalled that the ABC had allowed the segment to run. One wrote: “This is abhorrent editorial garbage. Completely disrespecting the views of many Australians and faith.” While another added: “Would they do this if he was a Muslim?” 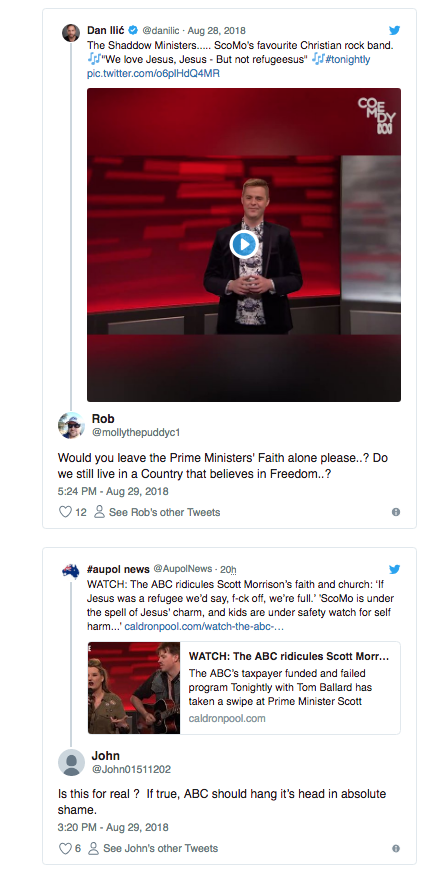 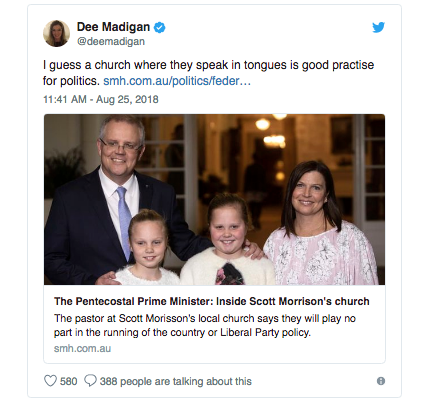 Madigan later explained she was not targeting Morrison’s faith: “I was having a go at politicians. I don’t care what religion a person is.”

Speaking to Sydney’s The Daily Telegraph, Peter Kurti from the Centre for independent Studies called the ABC comedians hypocrites. “The show would probably not mock the ­religious beliefs of Ed Husic, Islam, or Josh Frydenberg, Judaism,” Kurit said.