It’s official – the era of the ‘lad’ is over! It’s final nail coming with the closure of the British edition of ZOO Weekly this week (the Aussie version closed in October this year). 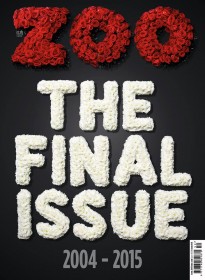 But rather than slip below the waves with humility, aplomb and a dabbed tissue to a teary eye, ZOO’s done exactly what any right respecting lad’s mag would do – bring in the lingerie models for one final disgraceful hurrah!

The final edition features a floral wreath cover and models clad in black knickers acting as pallbearers as they symbolically lower ZOO’s casket under the a final epitaph of “Ashes to ashes. Bust to bust”. Wicked until the very end! 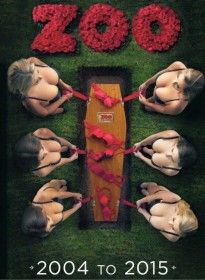 The British edition of ZOO UK launched in 2004 and closes after 11 years and some 610 issues. The Aussie edition didn’t fare as well, lasting from 2006 until its closure this year.

In early November, the publisher in the UK, Bauer Media, decided to call time on both ZOO and FHM and bought to a close the end of lad’s publishing that dominated the British magazine scene from the mid-90s until the mid-2000s and included such brands as Loaded, Maxim, Nuts, Stuff and Jack. 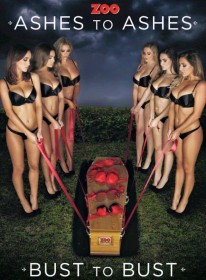 At the height of its fame, FHM UK printed a million copies a month and typically sold out in the first week. The edition went on to spawn 33 international editions (including an Australian one) and was one of the planet’s biggest and most transferable magazine brands

But alas, tastes and technologies change. And just as the lad’s category was the death knell for fleshier titles such as Playboy and Penthouse, a new generation has consigned the lad to the great publishing scrap heap. This new internet-savvy, immedidiate generation raised on web pages, CGI films and video games are clearly indifferent to what a paper magazine with staples has to offer.

And, it appears that the ZOO UK crowd were actually surpised to last as long as they did. The final message on its website reads: “So that’s it: after over 11 years of publication and 610 issues, ZOO Magazine is drawing to a close… We’ll be saying our final goodbyes in issue 610 – available in shops around the UK and via digital app stores on Tuesday 22 December. It also happens to be a special double issue (and a fitting collectable!), which we guarantee is the perfect ending and sign-off for Britain’s best men’s weekly.” Before ending: “It’s been emotional.”

The author of this piece worked at ZOO UK from 2006-2007. However, remembers very little of it.