A new analysis from YouGov Plan & Track has revealed how consumers feel about CommBank following a turbulent 12 months, and the results aren’t good.

CommBank’s Index score, measuring its overall brand health, was in positive territory at the start of 2018 with a relatively healthy score of +6.0.

However, in the intervening time, it sank to the lowest ever level YouGov has measured for the brand (-7.1).

Since the start of 2018, CommBank has faced accusations of breaching money laundering and counter-terrorism laws, lost the statements of almost 20 million accounts, suffered an online banking outage and been dissected in a report by the Royal Banking Commission. 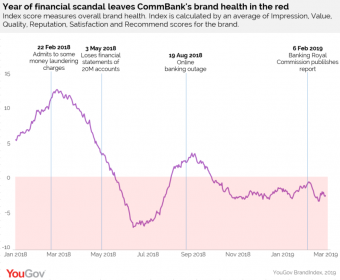 On 22 February 2018, CommBank was accused of more than 53,800 breaches of money laundering and counter-terrorism laws over three years.

The allegations were widely covered in the media, and while CommBank only admitted to some of the charges, its Index score fell following the story, declining from 12.3 on the day it broke to 10.5 a month later.

The bank faced more adverse publicity in May 2018 when it announced it had lost the financial statements of almost 20 million consumer accounts.

Although CommBank’s acting head of retail baking quickly issued an apology for the incident, this did not fare well with Australian consumers.

On the day of the incident its scores stood at +3.4, but within two weeks’ scores fell to zero.

However, an online banking outage on 19 August caused consumers to be locked out of their online and mobile banking accounts.

Its Index score fell again, dropping from +2.3 on the day of the online banking outage, to +1.5 a month after.

Since this incident, CommBank’s scores have remained in negative territory and took a further dent following the publication of the Banking Royal Commissions report on 6 February 2019, dropping from -0.6 to -2.8 two weeks later.

It’s not all bad news for CommBank, though.

While the brand’s Current Customer score has fallen slightly since the start of 2018, it is still a healthy +32.0.

YouGov Profiles data reveals that current customers of CommBank tend to be young (aged 16 to 29), working full time and based in Melbourne.

“What is noticeable is Australian consumers pay attention to scandals and mistake and do not forgive quickly.

“It’ll be interesting to watch if and when CommBank manages to fully recover.”