Set in the year 1987, Bumblebee is the sixth instalment of the live-action Transformers film series and centres around the character of the same name. To drum up excitement for the film’s 20 December Australian release among the core audience of families, Wavemaker tapped into 1980s nostalgia, through music. 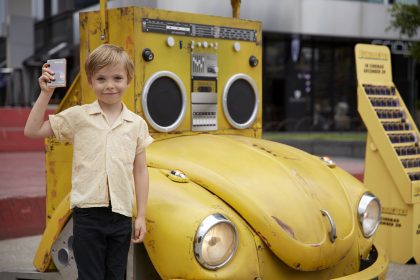 Taking place in Melbourne and in Sydney’s Parramatta and Bondi over consecutive weekends, the activation featured a VW Beetle transformed into a larger-than-life boombox with cassettes handed out to passers-by – introducing Aussie kids to the technology of the past.

The cassettes, naturally, come with a twist – a unique Spotify Code that, once scanned through the Spotify app, directs users to the Bumblebee Beats Spotify playlist, featuring classic 1980s tunes.

Aaron Hampson-Smith, director, investment and activation at Wavemaker Australia, said: “The team at Wavemaker were excited to work with Paramount Pictures and Habitat Media to create a memorable experience for young families, with a nostalgic nod to the past.

“Kids born this century have probably never seen a cassette, so this was the perfect way to introduce them to the world of Bumblebee and the Transformers franchise.”