Clearly both sides of politics know there’s a vote in it and tonight’s budget looks set to clamp down on big multinationals – many of them large media companies – who are reportedly siphoning swags of cash tax-free out of Australia.

The GST will also reportedly be extended to online shopping purchases from overseas, adding 10 per cent to the cost to purchases and downloads and significantly adding to government coffers.

The new online tax – which has already curried a favourable response from local retailers – has been nicknamed the ‘Netflix tax’ after the online video streamer said it had structured its US-based business so its Australian customers would avoid paying the GST.

Other online retailers such as Airbnb, Uber and some Google products are expected to feel the government’s tax wrath. However, it should be noted that Apple’s iTunes and Google’s Play Store already attract the GST.

Yesterday, the treasurer, Joe Hockey, announced the changes that will be announced in tonight’s Budget. Hockey said the changes were designed to “create a level playing field” and would generate an estimated extra $350 million for the nation’s kitty.

Both sides of politics clearly know they’re on a vote winner by taking a hard line on supposed tax dodgers; the Labor Party recently launching an outdoor campaign spruiking comments from leader Bill Shorten that said, “Our tax policy will make multinationals pay their fair share.” 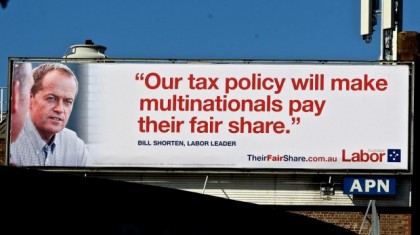 Netflix – which launched in Australia in late March – has thus far been able to undercut its local SVOD rivals Stan and Presto who’ve had to charge customers the goods and services tax. Despite initially bragging about not having to pay the local taxes, a spokesperson for Netflix in Australia said the video streamer would comply to the changes set to be announced tonight.

The free-to-air stations have also rightly complained about Netflix’s unfair advantage when they’ve been saddled with huge license fees plus the cost of producing local content required under the license agreements.

Agency icon and chairman of the free-to-air lobby group Free TV Australia, Harold Mitchell, had nothing but effusive praise for the treaurer’s decision. “I applaud what the treasurer is doing to haul Netlfix back into line to give Australian media a level playing field. The treasurer deserves every credit for this,” Mitchell was quoted as saying.

Meanwhile, the federal government will also clamp down on 30 multinational companies – including media behemoths Google, Apple, News Corp and Microsoft – it accuses of avoiding tax in Australia.

Hockey has not named any organisations inparticular but said “it was pretty evident which companies are involved”. In early April, the Australian CEO’s of Apple, News and Microsoft appeared before a senate enquiry into tax avoidance; allegations those fronting the enquiry vehemently denied.

Although what Hockey will actually announce remains unclear (save for tightening “part 4A of the Tax Act”) but yesterday he went on record as saying it would target billions of dollars spent by Aussies on product and downloads here in Australia that is subsequently shifted overseas.

He added that the government wanted to “ensure that the suppliers of digital products and services into Australia charge the GST on those products”.

The new measures to be outlined tonight are said to include new laws to recoup unpaid taxes, plus fines of as much as 100 per cent on unpaid taxes.