Funny man, stand-up doyen, TV and radio regular, Tom Gleeson, hosts his very own quiz show, Hard Quiz, starting on the ABC next Wednesday night. Here, he chats to be B&T about the show, why there’s not more comedy on telly, and why no one watches ads anymore…

Warning: article contains language some readers may deem as fruity.

You’ve scored your own show Hard Quiz that debuts on the ABC on the 19th of this month. Tell us, what’s it all about?
The quiz itself is very hard to do, and basically it’s my job to give the contestants a hard time. Whatever you’ve seen a game show host do in the past, I’m the direct opposite to that. If they do well, I don’t enjoy it. When they do badly, that’s my favourite part of the show. But don’t think it’s one long piss-take or parody, it’s an actual quiz with real people; I just host it in an unconventional way. 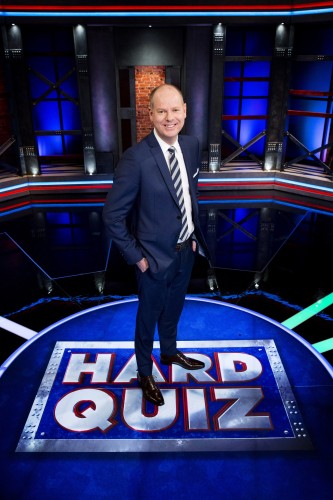 It being on the public broadcaster, can you give away large cash prizes of taxpayer money?
If they (the contestants) win they get a big brass mug with Hard Quiz written on it and get to be named the Hard Quiz champion. They get the thrill of winning and that’s it. And you know what? That seems like all they want, and when you win it is exciting. Shows (on free to air) should take note. Shows like The Hot Seat; they’re giving away millions (in prize money) for no reason whatsoever.

Was the show your idea?
My manager, Kevin Whyte, is also a producer of the show and he rang me up to get involved. I had a segment called Hard Chat on The Weekly With Charlie Pickering where I essentially interviewed celebrities and politicians and gave them a hard time. So the idea was to take that and push it out to a quiz show format. That’s perfect for me. As a stand-up (comedian) I’ve been doing it for years, making fun of the audience and hecklers; it’s my natural domain.

You went straight to the ABC with the concept or the free to airs were interested too?
I think it’s just a show that suits the ABC. It was always going to land there; we never even bothered taking it to free to air.

Is that because the commercial stations are a bit risk averse? They don’t want to try new things? They’d prefer to keep giving us more MasterChef, MKR and The Block?
For sure, the ABC is more experimental. But that’s not to say Hard Quiz wouldn’t work on Channel Nine on a Wednesday night. But you’re right in saying that the free to airs lack boldness. But in the second episode of Hard Quiz I tell one of the contestants to go f@ck themselves and it’s funny and the ABC would include that… Channel Nine would be saying, “You can’t do that! You can’t have the host telling contestants to go f@ck themselves.”

You’ve worked across a lot of medias and done a lot of TV. What’s the secret to a good telly show?
That’s the thing, we measure TV on how popular it is with audiences but that doesn’t always mean shows that get big audiences are well made. From my point of view, the secret is not to patronise the audience. You need to give the audience credit that they have a brain and they get things and this show (Hard Quiz) has it in spades. There’s plenty of humour too, even though I’m often saying horrendous things to the actual contestants. It will be fun watching me insult everyone and them tear strips of me as well, and all done with a smile.

Your hosting style appears less Tony Barber and more Joseph Goebbels?
Ha! I wouldn’t like to align with the politics of Joseph Goebbels, and I’m not sure how humorous he was.

You’re not going to get all these angry ABC viewers writing in, are you? Saying I want my 11 cents a day back?
I hope so! My fantasy is that there’s all these ABC viewers sitting there watching Hard Quiz and going, “It’s such a lovely quiz, why’s it being ruined by this horrible man?” But I am sure they’ll all tune in the next week and by the third week the penny will drop and they’ll realise I’m doing it on purpose. The humour is not that far removed from what you hear in offices across the country, anyway. Most people who work in an office take the piss out of each other all day and that’s part of the camaraderie. The shit-stirring we’re doing is something they’ll recognise. It’s all done with a wink.

There appears to be a lack of decent Aussie comedy on TV at the moment (the ABC aside). Would I be right in thinking that?
TV moves in trends. One year there’s all these variety shows, and then the next year everyone’s making cooking shows, and the next year it’s reality shows. It does appear sometimes that Australian TV can’t chew gum and walk at the same time; that all genres can’t co-exist at the same time. For years, The Logies had no comedy category, which I find alarming; comedy should be a staple. It should be comedy, drama, light entertainment and news; comedy just has to be in there. Yet the networks treat it like an occasional thing and I have no idea why. Part of me thinks the channels think it’s hard to do, it’s a lot of time and effort.

Take Nine’s (comedy) Here Come The Habibs from early this year; it got rave reviews but poor audiences. Is comedy just too expensive and risky?
It’s tricky for the commercial networks because good comedy is polarising. Take Fawlty Towers, (it’s) widely regarded as the funniest TV show ever. There’s some people who think it’s the funniest thing ever and others who just don’t get it or want to change it. And it’s the people who hate the show that makes the people who love the show love it a little bit more. Comedy can do that, it can really split audiences, and all good comedy makes people think they’re in some sort of club – they get it and that makes it niche. Almost by definition you can’t have mainstream comedy, or mainstream somehow means unfunny.

Is Hard Quiz your stepping-stone to some high paying gig at the free to airs? Could you be the next Eddie McGuire?
Maybe! I reckon Channel Nine will watch Hard Quiz and say this is great. It’s a game show, I’ll be wearing a suit; I’ll look like I could be from Channel Nine. And when they realise you don’t have to give away any money they’ll love it. I think (Channel) Nine would love it, but only if I was nicer and we changed the name to Lovely Quiz.

You appear regularly on TV and radio. What’s your view of the current state of media in Australia?
I think I’m a pretty fair representation of the market. I watch the ABC news, then I watch 7.30. I want to see news stories I’ve read about during the day that have played out on Twitter or Facebook or the online news sites. If I like what’s on the ABC I’ll stay, but I rarely look at the other networks. From there I’m off to Netflix crazy time. I think Seven, Nine and Ten are really up against it. Maybe it’s just me, but I can’t think of any of my friends who watch those networks.

You think it’s that grim for the commercial players?
When I started in stand-up (comedy) 15 years ago, TV shows and ads were great sources of jokes for comedians; everybody in the audience had watched the show or seen that particular ad and so everybody could laugh at the joke. That doesn’t happen now. You could not walk on stage now and say, “Has everybody seen this ad?” because the answer would be no. Everybody is recording TV and fast-forwarding the ads or watching Netflix, so they don’t need to watch ads. That’s the big challenge (for TV networks), how do you get the ads into shows that people are watching? But at the same time good content wins, and at the moment it’s winning on streaming services because they’re making the content that everybody is talking about. But the commercial networks say the numbers (watching SVOD) are still a drop in the ocean; the great unwashed still watch network TV. It must be just me and my elitist industry mates watching the ABC and my wanker mates watching streaming services, ha, ha!