For the first time in a decade Time magazine has dispensed with any coverlines, although the startling image probably needs no explanation.

In a testament to the power of print, the magazine’s cover shows the White House morphing into the Kremlin – a clear attack on allegations that President Trump has sidled-up with the Russians and adds to the further speculation Moscow was somehow behind Trump’s election win. 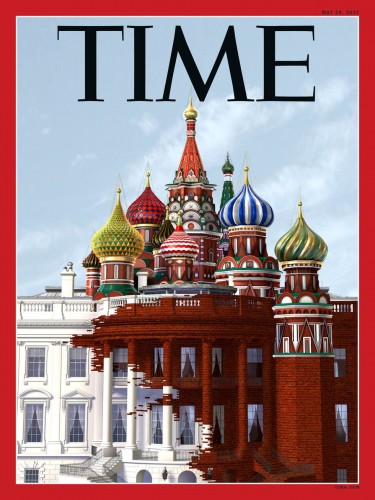 The cover comes only days after the President sacked FBI Director James Comey and revelations Trump revealed highly classified information (believed to have come from Israel and regarding apparent bombs on planes concealed in laptops) to the Russian foreign minister, Sergey Lavrov, when he was in the Oval Office.

In turn, Trump has called the allegations the “single greatest witch hunt” in US political history. The President is yet to comment on the new Time cover.

However, not everyone’s happy with Time’s effort. Famed comic mag MAD is claiming Time ripped off the idea from something similar it did on late 2016. See below: 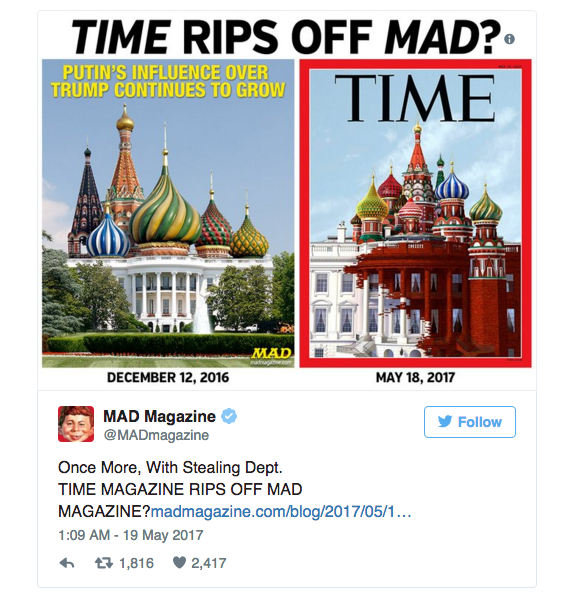 The cover has only been released over the past 24 hours and, as yet, there hasn’t been a heap of social media rage either way. Time’s executive editor Matt Vella, wrote on Twitter of its releases: “Our new cover this morning, it’s been a decade since @TIME did not have a cover line.”

Some of the social media comments B&T could find included: “It’s brilliant – funny and artistic. Its really funny to see Russians pretending disdain as well.”

“It’s sad to see such a great country brought down to the level of Russia.”

“Time magazine set a very low standard yet fail to achieve it.”

“The globalist big brother media is in hysterics trying to oust an outsider president, elected by the people. He doesn’t fit into the globalist-imperialist-orientalist agenda of their deranged mentality.”

“Very low level journalism, the picture is no to Kremlin, but of the St Basil cathedral.”