Who would have thought the horror cult classic of Texas Chainsaw Massacre inspired the genius that won two creatives the title of best radio ad of the year and a free trip to Cannes.

The ad was created by duo Elle Bullen and James Orr from Clemenger BBDO for Maltesers and on Thursday night won the illustrious Gold Siren Award for best radio ad of the year. 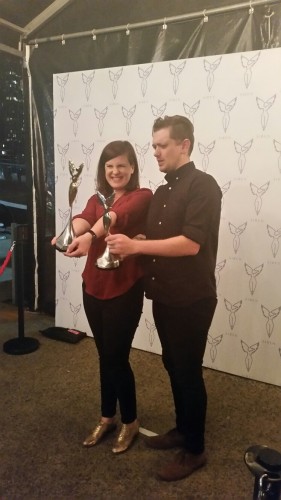 Elle Bullen and James Orr with their Sirens.

Held at Alumbra bar in Melbourne’s Docklands, the annual Siren Awards kicked off with a packed room and delectable hors d’Oeuvres. Hosted by comedian and The Weekly’s Tom Gleeson, the room was soon in stitches.

The winning ad by Bullen and Orr put a family spin on the gory thriller showing that it’s manageable when you’ve got Maltesers to chow down on. There’s jaunty and upbeat voices coupled with sporadic hums of the chainsaw as the ad asks viewers to “lighten up their movie”.

The judges of the Sirens reckoned the ad was innovative and attracted listeners. The ad was produced by audio specialist agency Eardrum.

Taking the stage, Bullen and Orr were gloriously stunned. “Normally at awards you get an idea if you’re a winner,” quipped Orr, “but we had no idea!”

Creative agency BMF also had a stellar night, winning a silver in the radio campaign (three or more ads in a campaign) and snagged a hefty $5k for the client award. Both ads were for BMF’s client ALDI.

“Humour in radio ads can gain so much cut through on radio,” said Joan Warner, CEO of Commercial Radio Australia, the radio industry body.

“All the winning ads combine excellent writing, clever craft, plus comic timing and are deserving winners of this year’s Siren Awards.”

Despite media fragmentation, Warner told B&T radio has stuck by its guns and still manages to deliver, exemplified by its increasing ad spend year on year.

And when it comes to the annual Siren Awards – which have been running for 12 years – Clemenger BBDO is one agency sweeping it up. The agency has won the coveted Gold Siren three times. Eardrum too has nabbed a number of awards, as has DDB and McCann.

B&T travelled to Melbourne for the Siren Awards as a guest of Commercial Radio Australia.