It was reportedly losing $200 million a year before Woolworths finally closed its ill-fated hardware chain Masters Home Improvement on the weekend, but a new report says the bigger problem was the chain simply never resonated with customers.

According to a study by Roy Morgan Research into the customer satisfaction ratings of Australia’s hardware chains, Masters could only ever muster a distant fourth in the rankings. 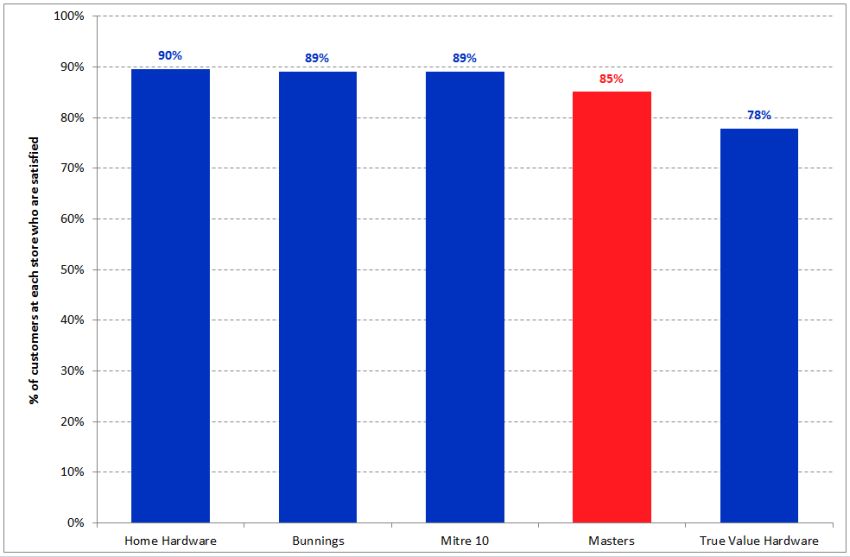 Home Hardware came out on top with a customer satisfaction rating of 90 per cent. Bunnings and Mitre 10 share second spot with 89 per cent each, while Masters Home Improvement was fourth with 85 per cent. Only True Value Hardware satisfies a lower proportion of its customers with 78 per cent.

According to Roy Morgan, the beleaguered Masters chain had been stuck in fourth place all year, seemingly incapable of overtaking any of its higher-rating rivals. Indeed, since Roy Morgan started measuring Masters’ customer satisfaction in late 2011 (the year it opened its first stores), it has never risen higher than fourth spot, and actually spent all of 2012, 2013 and 2014 in fifth position.  Not an auspicious start for a business hoping to go up against category king, Bunnings.

Roy Morgan data shows that since Masters launched its much-criticised closing down sale in late August, visitation to the store has risen from an average 1.8 million shoppers per four weeks to 1.9 million. But this increased customer volume didn’t bring improved satisfaction: on the contrary, that saw a slight decline from 86 per cent to 85 per cent.

Commenting on the study, Roy Morgan CEO, Michele Levine, commented: “Masters Home Improvements’ closure was a long time coming, but as we have seen with Roy Morgan’s Customer Satisfaction data, the writing was on the wall almost from the start, with the chain never achieving the satisfaction scores to pose a threat to Bunnings, Mitre 10 or Home Hardware.

“If success was judged solely by shopper volume, then Masters’ fate may have been different. As of February this year, Masters had overtaken Mitre 10 for average number of customers per month (1,742,000 vs 1,673,000), and was well ahead of smaller chains Home Hardware and True Value. But this never translated into improved satisfaction scores, with Mitre 10 maintaining a comfortable lead in this respect.

“Now that Masters is gone, it will be interesting to see where its customers go. With almost 1.9 million Aussies per four weeks currently looking for another hardware store to shop at, this represents a golden opportunity for Bunnings, Mitre 10, Home Hardware and True Value to boost their customer base. Furthermore, if they provide better service to these shoppers than Masters once did, they might even improve their customer satisfaction scores into the bargain.

“Obviously, a combination of factors contributed to Masters’ downfall, but its failure to compete in the customer satisfaction stakes is a reminder of what an important piece of the puzzle satisfaction is. True Value Hardware, in particular, should take heed – this one-time award-winner of the Roy Morgan Customer Satisfaction Hardware Store of the Year has seen a generally downward trend (with some fluctuations) since then,” she said.