Australian online advertising expenditure continues to grow, recording a seven per cent year-on-year increase, with total revenue edging to $7.9 billion for 2017, according to new research.

The IAB/PwC Online Advertising Expenditure Report found that all categories experienced growth, with classified advertising leading the way at 15 per cent year-on-year growth to reach $1.5 billion in 2017, thanks to strong local companies including REA Group, Carsales.com and Seek.

Real estate remains the leading segment in classifieds, followed by recruitment and automotive.

While classifieds now represents nearly one in five digital ad dollars in Australia, in the US it’s only four per cent of ad spend.

Search and directories continues to be the dominant sector, recording five per cent growth in 2017 to reach $3.6 billion, representing 45 per cent of all advertising dollars spent in Australia.

General display grew six per cent to top $2.8 billion and 36 per cent of the market, with the video component of display growing 43 per cent to reach $1.1 billion in total. 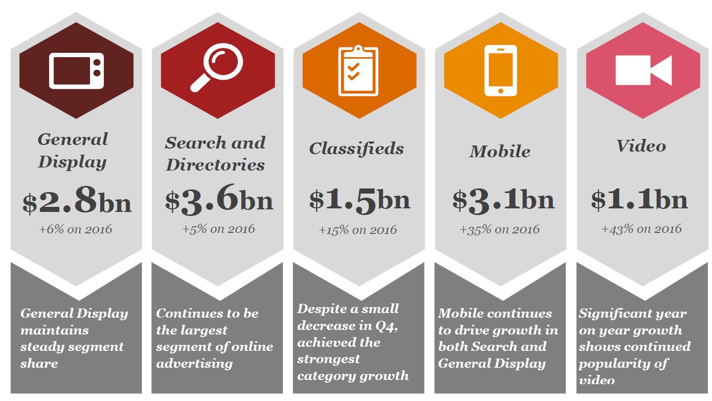 Of this, 73 per cent was attributed to smartphones and 27 per cent to tablets, while the spend was split evenly between mobile search and mobile display

The report also detailed the advertising spend for the last quarter of 2017, noting that it reached $2.12 billion – up 10.5 per cent on the previous corresponding quarter.

Total general display advertising increased by 21.1 per cent in the final quarter of 2017 compared to the same quarter in 2016.

In Q4 of 2017, general display advertising bounced back from its relatively soft performance in the first three quarters of the year, recording a 14.2 per cent increase on Q4 2016 and 21.1 per cent increase from Q3 2017.

Video was a key driver for the growth in general display, increasing 41 per cent on Q4 2016 representing $344 million of the quarter’s ad spend. FMCG (representing a 9.9 per cent share) and automotive (with a 9.6 per cent share) were the top two segments in video expenditure.