Do you see a lot of people wearing Lycra but not doing a whole lot of attempting to get fit in it? Well, the athleisure wear craze can’t be denied if the findings of a new Roy Morgan Research poll are to be believed.

According to the survey we Aussies love our athleisure wear and the Gen Xs (those born in the 70s and early 80s) are its biggest fans.

While it would appear the “I wear athleisure but never do any exercise in it” myth is just that, a myth. Roy Morgan found that three-quarters of athleisure buyers do regular exercise which makes them 29 per cent more likely than the average Aussie to do so.

However, the study also found that athleisure wearers also sat around in their sports gear drinking lattes in cafés, noting they were 17 per cent more likely to do so than the national average.

And it’s big business too. We spent $1.5 billion on the stuff in the past 12 months, up almost 50 per cent from five years ago. 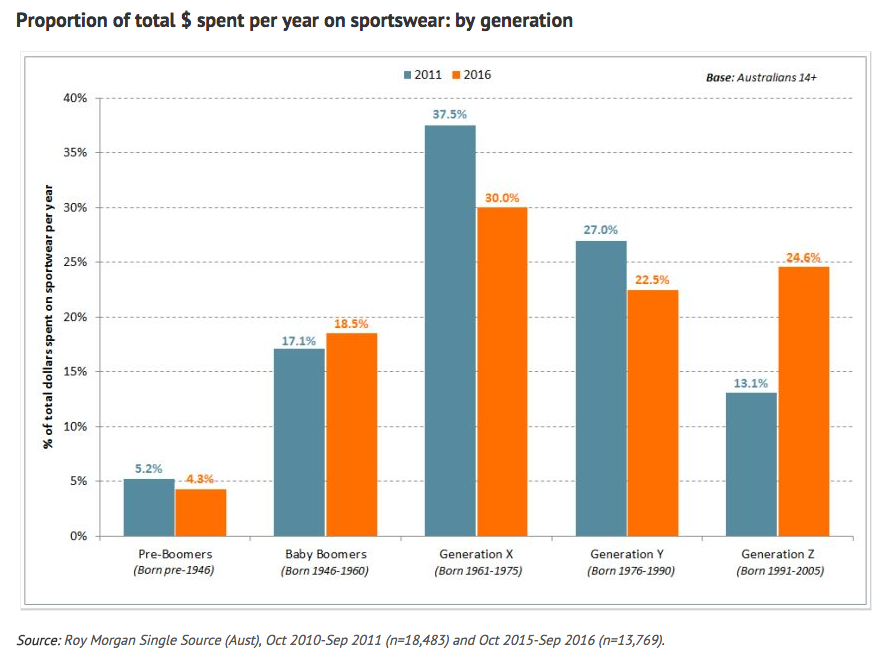 Some 1.6 million Australians (8.1 per cent of the population) buy sportswear (be it men’s or women’s) in an average four-week period, up from 1.3 million (7.0 per cent) in 2011. This represents an extra 300,000 people purchasing this kind of clothing per four weeks.

Commenting on the study, Roy Morgans’ communications director Norman Morris said: “Spearheaded by brands like Lululemon, Lorna Jane and Nike, and collaborations such as Stella McCartney and Adidas, ‘athleisure’ wear —or chic active-wear—has been on the rise for some years now. Australia is no exception: not only are more people purchasing sportswear in an average four-week period, but the value of this retail category is increasing. And it looks set to continue its upward trajectory: whereas an old pair of tracky-dacks may once have been acceptable gym wear, it’s now almost de rigueur to look good while exercising!

“In fact, some athleisure garments are so stylish they double as streetwear. Celebrities like Beyonce and Kate Hudson have their own active-wear ranges, while others, like Gigi Hadid and the Kardashians, are regularly snapped wearing their designer sportswear out and about. No doubt this celebrity dimension would have something to do with the trend’s appeal to young Aussies from Gen Z.

“As we’ve seen, Generation Z now accounts for much more of the total dollars spent on sportswear than they did in 2011, due both to the increasing numbers of them buying it and the fact that they are spending more on it than they were back then. In fact, the average four-weekly expenditure by a Gen Z sportswear buyer is $76, up from $68 in 2011, and second only to Generation X ($80).

“Roy Morgan data confirms that exercise and sports participation decline with age, and people from Gen Z are not only the most active of the lot, but the only generation to have seen a rise in participation over the past few years. They are also much more likely than other generations to agree with key statements such as ‘I wear clothes that will get me noticed’ and ‘It’s important to look fashionable’, which goes some way to explaining why athleisure wear is such a hit with them.

“The challenge for sportswear retailers and brands will be to retain these customers as they age, when life starts getting in the way and their sporting activities and fashion-consciousness taper off.

“Of course, with this generation being well known for its interest in health and fitness (Gen Z is 41% more likely than the average Australian to agree that ‘I love to do as many sports as possible’, for example), there is a chance that if brands and retailers go about it the right way, they may be able to build long-term relationships with their youngest customers by encouraging this interest.

“Containing a wealth of demographic and psychographic data about Australian consumers, Roy Morgan Single Source can assist players in the sportswear industry to pinpoint trends, attitudes and behaviours that will enable them to approach the current athleisure phenomenon strategically and efficiently so as to attract the most receptive customers.”