SPC has launched their new Bean Pot range with a hands-on out of home campaign that saw personal deliveries of the protein packed little pots delivered to hungry but time-poor CBD office workers and tradies.

The campaign, which ran to mid-August, used oOh! media’s digital panels in offices, gyms, retail and study environments to encourage people to nominate a hard working colleague in need of a quick meal to receive a “slab” of Bean Pots delivered through oOh!’s experiential offering, EDGE. 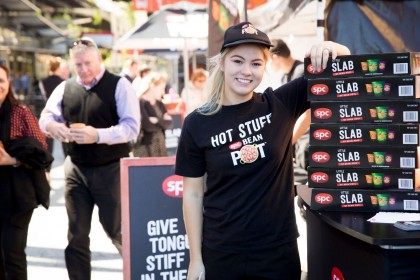 In addition to the delivery element, the campaign incorporated pop-up stands in CBD and Study environments that offered the opportunity to sample the new product in a location close to their workplace, which was also promoted through oOh!’s assets.

“We know that the audience SPC wanted to reach are people that are looking for a quick snack on the go or during a short lunch break, including office workers, uni-student and tradies,” he said.

“To reach these people, we used our digital panels around lunchtime to run creative directing them to the pop-ups via geo-mapped creative, and at other times presented creative encouraging them to organise a personalised delivery for a co-worker. eDMs were also sent to our office block network letting people know about the delivery opportunity.”

Amy McNeill, spokesperson for SPC, said that the campaign was successful in reaching the desired audience.

“The media mix for our campaign was built around achieving the highest reach possible to a very specific audience. Through the life of the campaign we reached over 5 million people within our target audience,” McNeill said.

“We wanted to demonstrate that the new Bean Pots were a tasty lunch option for time-poor people like office workers, students, and tradies.  “We also knew that reaching them in the appropriate environments at the right time was paramount. Through this integrated Out Of Home campaign we managed to deliver.”

The campaign is the latest in a number of deeply integrated campaigns developed by oOh! that utilise its wide range of audience-led assets to reach specific audiences.