A controversial episode of South Park that was banned from airing in Australia after protests by the Catholic Church way back in 2006 finally made it to Aussie screens last night.

The episode aired on SBS 2 last night to little fanfare or any rage, for that matter. The episode, known as “Bloody Mary”, features a concrete statue of the Virgin Mary menstruating from her rectum.

You can check out some of the bloody action here:

The plot goes that Pope Benedict XVI visits South Park and gets sprayed in the face with said discharge. The locals also see it as a sign and try and use it to cure Randy’s alcoholism.

Way back in 2006, the Catholic Church in Melbourne petitioned SBS not to air the episode who ultimately gave into the pressure and agreed not to screen it. However, industry site TV Tonight has reported that the episode has previously aired on Foxtel’s The Comedy Channel in Australia. 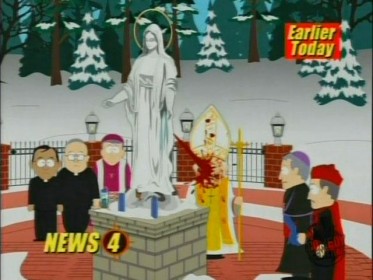 Coincidentally, in an article last week on the SBS’ own website, the episode was voted the fifth most controversial South Park episode of all time. Check out the full naughty list here.

And the fury wasn’t confined to Australia, either. When the episode aired in the US for the first time it infuriated Christian groups who demanded it never air again in any form. However, that never happened.

New Zealanders also complained bitterly about the airing of the episode in their county, forcing the then Prime Minister, Helen Clark, to issue a statement denouncing it and describing it as “revolting”.