Mark Ritson has issued a warning to the TV networks, Claiming Facebook and Google can’t take anymore digital revenue from newspapers and magazines.

Instead, the only choice to grow was to start cannibalising other media owners, starting with TV.

Speaking at NewsMediaWorks’ INFORM Summit on Friday afternoon Ritson used a fifty-year chart from Morgan Stanley which has tracked advertising spend in Australia, and highlighted the incredible shift that has taken place since the invention of the internet. 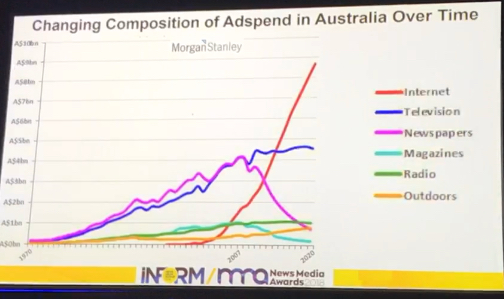 “At the turn of the century, approximately 70 per cent of advertising budgets went to TV and news media; now they would account for less than 30 per cent.

“GroupM did an assessment of the world’s media (minus China) and calculated that 84 per cent of digital revenue this year went to Facebook and Google – a growth of 186 per cent.”

So the red line representing “Internet” refers largely to Facebook and Google and as the chart above shows, the main “losers” from this shift has been newspapers and magazines.

“The story of what happened to news media and magazines is supremely important. We came out of the GFC (global financial crisis) and the rivers never ran gold again.”

However, it wasn’t all doom and gloom for news media companies.

Ritson reminded the audience that the chart only tracks ad spend. And while advertising spend represents an important part of news media companies, it is not the “be-all and end-all” that it once was.

“We once lived in an era where 70 per cent of revenue for news media came from advertising. Those days will never return.

“We live in an era where for most (not all) media companies, 30 per cent is really the target we should aim for. The other 70 per cent can come from a variety of places, diversification or, in my opinion, from subscription.”

Largely positive about the future for news media companies, Ritson claimed he saw “genuine green shoots” and felt a “new vibe” around what’s going on in these businesses.

“There is energy and growth and youth. There is a new time coming, a new reality coming for news media.”

Turning his attention to out-of-home, Ritson pointed out that these days these businesses are more digital than traditional.

“72 per cent of outdoor ads in Sydney are now digital, not print-based, so it’s really a digital business. It’s a growing business. It hasn’t really been hurt. In fact, it’s had a decent ten year prognosis.

“And the same goes for radio. Also a digital business. In the UK last month, it was the first month that British radio was delivered more digitally than through broadcast. Again, a medium that is in good health.

“Not everyone was hurt by the rise of Google and Facebook. That’s a myth.

“And then finally TV. If you read the regular media, you’ll learn that TV is ‘totally fucked’, ‘massively fucked’, ‘absolutely fucked’ and ‘definitely about to disappear’ etc. etc.

“TV has done a spectacularly bad job of managing their reputation. Not only was it not affected by the digital duopoly, it continues not to be affected by it. It’s not in decline, not in the UK, not even in the US. It is so far untouched. The TV companies are alive and well.”

To demonstrate his point, Ritson referenced last week’s SSI data from America for the first half the year which revealed that the biggest slice of the advertising pie has not gone to Facebook or Google, but ComCast.

“The real battlefield for TV is starting to emerge. The last decade was about how the digital duopoly totally fucked news media and took most, if not all, of their money.

“The next decade is about a very different battle. Which make no mistake, the digital duopoly must win in order to grow, and grow they must.

“There’s no more money left in news media advertising to take. So they must come after TV.”

“Will the traditional TV networks be able to defend their turf? Or will foreign interlopers take control of the most important portal in history: the TV.