American restaurant chain IHOP has tweeted a joke about pancakes looking like flat-chested women, which is awkward because October is breast cancer awareness month.

The tweet has since been deleted but here’s a screenshot of the flat-chested joke: 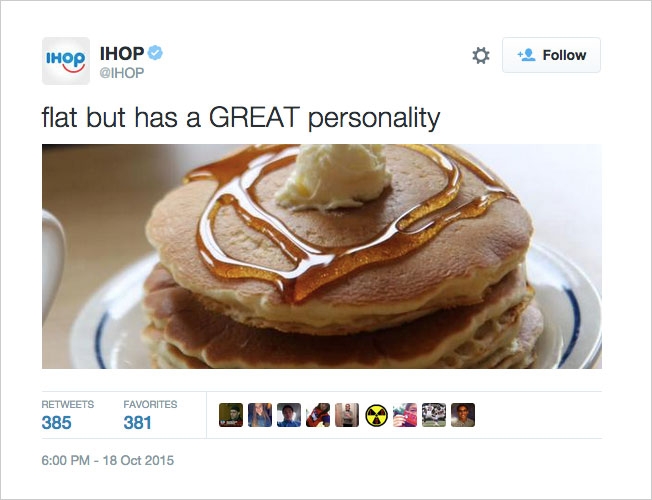 The digital marketing experts at IHOP Kirk Thompson and Darrin Kellaris, who handles the IHOP Twitter account, told Adweek why the company is tweeting like an awful teenage hip-hop fan:  “Twitter for us skews younger so it’s important to talk the talk when it comes to that fan base.”

“There has been a refinement of our Twitter voice,” Thomspon said. “We’ve gotten more specific, more targeted about how we speak.”

Dear @IHOP: Making crude references about the size of women’s breasts is never a good thing, but it’s especially off the mark THIS month! + — Kimberly A. Woodard (@BeingKimmie) October 19, 2015

.@IHOP I like my breakfast fertile, submissive to man’s God-given authority, lush, and available 24 hours per day. Please advise.

The tweet was quickly deleted and IHOP issued an apology:

Earlier today we tweeted something dumb and immature that does not reflect what IHOP stands for. We’re sorry.