The twitter storm between UK TV personality Piers Morgan and American plus-sized model Tess Holliday has taken yet another unsavoury turn after Morgan penned an open letter branding Holliday as “morbidly obese” and suggesting her size is “going to kill you”.

The ongoing feud between the the outspoken Good Morning Britain host and Holliday began late last month when the UK edition of Cosmopolitan magazine featured the 32-year-old on its cover. 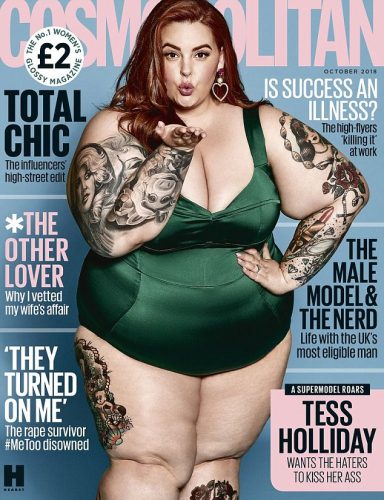 Morgan – who doesn’t know Holliday personally – took umbrage at the cover branding it “dangerous and misguided” as the UK “ battles an ever-worsening obesity crisis”.

The right-wing commentator appears reluctant to let it go, yesterday penning a full attack over Holliday’s weight in The Daily Mail. You can read it in full here. 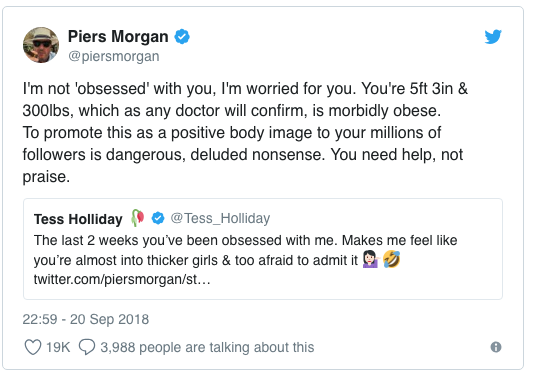 Morgan writes: “It was a very striking, newsworthy cover because you are 5ft 3in and weigh over 300lbs (137 kilos). As such, you are someone suffering from morbid obesity.

“That’s not me being a ‘fat-shaming douchebag’, as your legion of fans will doubtless immediately scream. That’s just a fact” before adding, “In other words, it can kill you.”

He went on: “Nobody, male or female, could see their weight surge to over 300lbs if they’re just 5ft 3in tall, and be genuinely happy. Right now, I think you’re trapped in a hellish spiral of self-delusion in which your soaring fame and fortune is entirely dependent on you remaining morbidly obese.”

Morgan then went as far as to claim that she was only getting the cover of Cosmo as she is dangerously overweight, yet “feigning joy”.

He then added that his own weight wasn’t perfect and he was, himself, trying to lose 15lbs (seven kilos) as advised by his doctor.

Morgan’s letter ends by saying that the most inspirational thing Holliday could do would be to lose weight instead of gaining more and that he would be the “first to salute and celebrate” her if she did.

Holliday has not yet responded to Morgan’s latest piece, however, previously told Good Morning America: “Unlike Piers Morgan, I don’t need to troll people to stay relevant. I get to have an awesome job and do what I love and hopefully change people’s lives.”

For its part, Cosmopolitan defended its cover and spread of Holliday, the magazine’s editor Farrah Storr telling Morgan’s Good Morning Britain, “The reason [Holliday] is on my cover is to show there is a different way to look.”