The News Corp newspaper famous for its croc and UFO stories, NT News, has finally appointed a sole journalist to head up this very niche, very newsworthy category, and the coveted job has gone to Jill Poulsen.

And no, this is not a joke.

CONGRATULATIONS @jill_poulsen FOR BEING NAMED THE NT NEWS’ FIRST EVER CROC/UFO REPORTER. DON’T FARK IT UP. THE WORLD IS WATCHING.

Poulsen has got plenty of experience in the field, with Fairfax reporting she’s even witnessed a UFO in action.

“It wasn’t a plane, it was quite literally an unidentified flying object,” Poulsen said.

“Ever since then, I really believed that they were out there and that the truth is out there for us to find.” 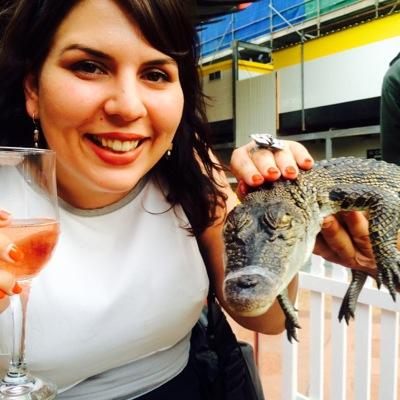 Poulsen showing us why she’s made for this job. Source: Twitter

Poulsen isn’t a stranger to breaking croc news either, penning lead stories like ‘”Indecent-a-saltie” about a man who put his testicles inside the jaws of a saltwater crocodile.

“I hope that one day I will get so in touch with my subjects that I will be able to swim with them,” Poulsen said.

Twitter fans naturally have a case of job jealousy:

@TheNTNews @jill_poulsen I just got a BAD case of job envy!

what’s to fuck up? Most of the @TheNTNews stories are a croc anyway! ?

@jill_poulsen Congrats on getting the best job in the world at the best newspaper in the world. #lovetheNTNews