Channel Nine’s journalism ethics are under the spotlight after hosts of The Today show repeatedly name-dropped brands from the weekend wedding of Nine reporter Peter Stefanovic and Today presenter Sylvia Jeffreys .

Stefanovic, a senior reporter at Nine and younger brother of Today host Karl, married Jeffreys in a ceremony south of Sydney over the weekend. The nuptials were touted as the “wedding of year” and guests included a number of Channel Nine luminaries such as Lisa Wilkinson and Richard Wilkins, while sports reporter, Tim Gilbert, was MC for the day. 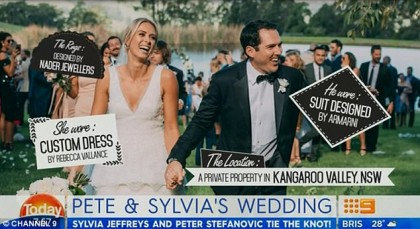 Clearly in no rush to race back to the Sydney studios, Today even broadcast yesterday from near where the wedding reception was held. Karl describing the area as “the perfect place to get married” followed by a clip of Wilkinson spruiking the area.

According to reports, it appears some sort of deal was in place between the newlyweds, Nine and brands who supplied product on the day. Media covering the wedding on Saturday were also given a list of brands that catered for the day including photography, the rings, flowers, entertainment, food, wedding planning, and hair and make-up.

It follows reports that best man Karl – who sang his best man speech – inferred the the family never paid for anything due to its celebrity status. “We got beautiful heads, we don’t pay for shit, agents deliver it, and they know why,” Stefanovic senior allegedly warbled to the 160 guests.

Yesterday, The Today Show spruiked the $6500 a night Ooralba Estate where the nuptials were held, the bride’s and bridesmaids’ Rebecca Valance frocks, Stefanovic’s Armani suit and the jeweller who made the rings. Valance has made herself available for media interviews. 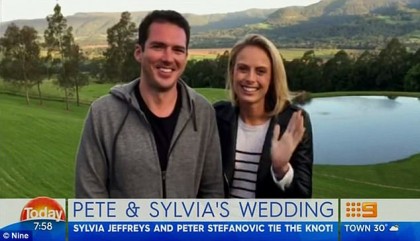 However, Nine deny any deals were in place, a spokesperson telling Fairfax Media: “There were no deals done for the location, services provided for the wedding or anything else, for inclusion in the coverage on The Today Show.

“That coverage was in response to media coverage of the events and then feedback from our viewers who wanted to know more.

“Sylvia and Peter consciously chose to do no commercial deals around their wedding,” the spokesperson said.

The newlyweds even managed to interrupt their honeymoon to appear on The Today Show yesterday to thank, you guessed it, The Today Show. A camera crew hanging around your honeymoon is probably something most of us would baulk at.

“If you are thinking of locations to get married, the beautiful Kangaroo Valley, where we are at the moment, is primo,” Peter told Today’s viewers.