Advertise with us
Posted 6 December, 2019


An Italian newspaper has been outlawed by two football clubs after a particularly poor choice of words in a headline.

The Corriere dello Sport newspaper sparked debate across Italy this week over its ‘Black Friday’ headline, which accompanies a photo of Inter Milan footballer Romelu Lukaku. 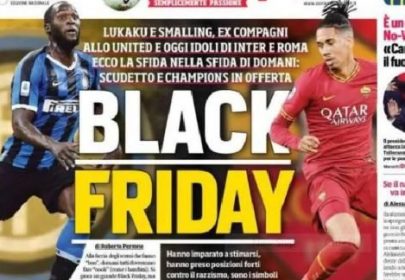 Lukaku was racially abused by opposition fans during a game earlier this year.

“Instead of focusing on a battle between two teams … Correire dello Sport comes with the dumbest of headlines I have ever seen in my career,” he said.

“You guys keep fuelling the negativity and the racism issue instead of talking about the beautiful game that’s going to be played at the San Siro between two great clubs.

“Education is key. You guys at Corriere dello Sport should do a better job than that.”

The article was meant to be previewing today’s game between Inter Milan and Roma, and also included an image of Roma defender Chris Smalling.

Smalling also hit out at the paper.

“While I would have liked to spend the day focusing on the big game tomorrow, it is important that I acknowledge that what occurred this morning was wrong and highly insensitive,” he said.

“I hope the editors involved in running this headline take responsibility and understand the power they possess through words, and the impact those words can have.”

Despite the backlash, the paper’s editor Ivan Zazzaroni has defended the choice of words, describing it as “innocent”.

In a joint statement, the two clubs stood by their decision to ban the newspaper, but acknowledged the importance of moving forward.

“In response to the ‘Black Friday’ headline published today by the newspaper, Roma and Milan have decided to ban Corriere dello Sport from our training facilities for the rest of the year and our players will not carry out any media activities with the newspaper during this period,” the clubs said.

“Both clubs are aware that the actual newspaper article associated with the ‘Black Friday’ headline did portray an anti-racist message and for this reason, we have only banned Corriere dello Sport until January. We remain totally committed to tackling racism.”