PR maven Roxy Jacenko has released CCTV footage of a woman allegedly defecating on the doorstep of her Sweaty Betty offices in Sydney’s ritzy Paddington.

Jacenko alleges it’s not the first time the woman – who’s been dubbed the ‘Paddington Pooper’ – has performed the act with Jacenko reporting she’s repeatedly found human faeces in the street over the past three weeks.

Apparently, it has now escalated into a police matter.

Check out the video below (if you so feel the need).

Some of her followers were a little kinder, suggesting that the woman may have some sort of health issue that brings on an urgency in the nether regions.

However, Jacenko dismissed the idea, instead suggesting it was some sort of thrill or vendetta for the woman.

“This isn’t a person with irritable bowel syndrome, this is a person who’s getting off on it!'” Jacenko wrote to social media. “Why do you need to shit in the street?”, she added.

And, it appears Jacenko might be right. On Triple M Sydney’s Moonman in the Morning this morning, psychotherapist Kaylene Wynn revealed the motivation behind a ‘Poo Jogger’.

She said: “It’s the ultimate power play that’s being acted out here.”

“The behaviour is very intentional and the motivation is usually anger or envy and it displays aggression and not just in a primal way but in a form of indictive rage.

“They become really quite invincible in this process and quite powerful in their own being, it can become addictive to them in many cases.”

Apparently, the woman is not some disgruntled ex-Sweaty Betty employee and Jacenko has inferred that members of the public have contacted her with the woman’s identity.

“I don’t want to embarrass the girl, I just want to know who it is and I want it to stop, as do all of the neighbours on the street,” Jacenko added.

Meanwhile, a nearby resident told news wire service AAP that there had been at least five stools in the street over the past few weeks.

“One is fair enough if you’re caught short – but four or five I think is too much,” the unidentified Paddington resident enthused.

“The poos have come more consistently recently. But I hope the woman isn’t shamed as she could possibly have a medical condition.”

And it’s not the first time that Jacenko’s office have come under attack. In April, some rogue spray painted “Roxy is a c#nt” on the side of her offices, while in July the office was attacked with paint-filled eggs. 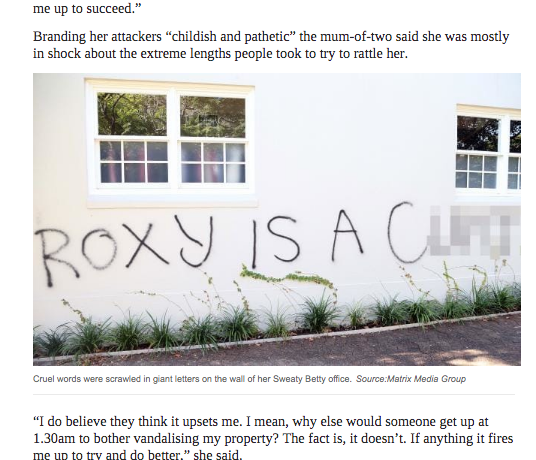 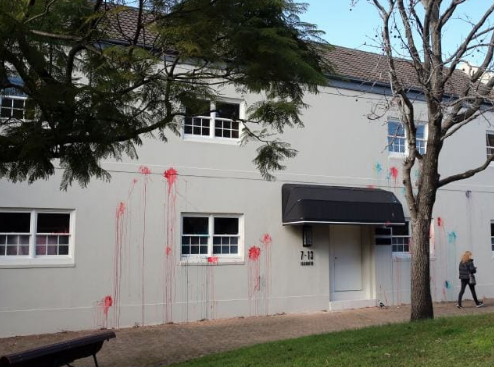