British media has turned on Prince Harry and wife Meghan after their shock decision to step back from their roles Royal duties.

Even press that typically doesn’t give coverage to the Royal family gave the story extensive front page coverage.

As is usually the case, controversial broadcaster Piers Morgan led the attack on the pair. Morgan, who’s never been a huge fan of either, used a column in the Daily Mail to label them “the two most spoilt brats in history”. 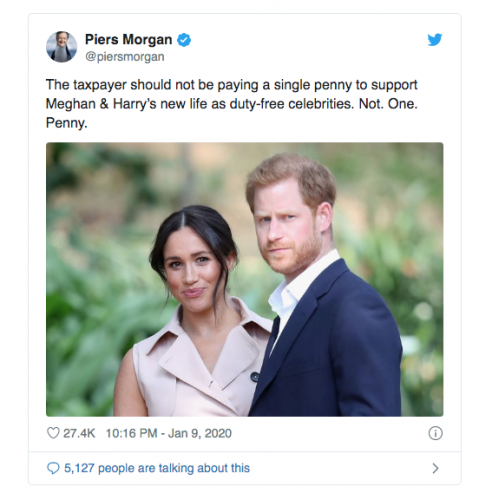 He called on the Queen to “fire Their Royal Hustlers” before adding: “A the age of 93, and with her 98-year-old husband Prince Philip suffering ill health, she’s [the Queen] had to suffer the repulsively rude indignity of being treated like a piece of insignificant dirt by her own spoiled brat grandson and his scheming, selfish D-list actress wife,” Morgan wrote.

Both Harry and Meghan have had a fractious relationship with the British press and even cited it as one of the reasons they’re “stepping back” from their Royal duties.

The two are currently suing The Mail On Sunday after it published one of Meghan’s private letters.

At the same time, Harry also launched an emotional attack on the UK tabloid press for what he called a “ruthless campaign” against his wife and likened it what his mother, Princess Diana, had had to endure.

On the pair’s personal website, Harry and Meghan recently announced they would no longer be participating in the Royal Rota system – a way of giving British print and TV news exclusive access to Royal engagements. 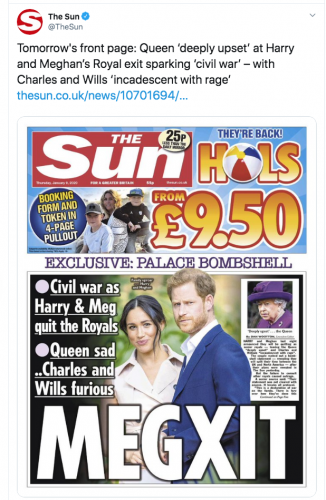 The Daily Express went with “Queen’s dismay as Harry and Meghan step back from royal life,” before suggesting something was rotten at “the firm”. 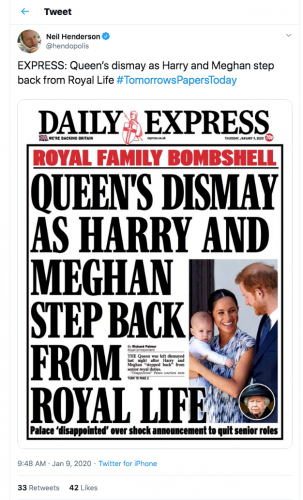 The conservative The Times – not know for its front page coverage of royal matters – went with “Harry and Meghan quit roles amid Palace split.”

While tabloid The Daily Mail gave the split 17 pages of coverage including the front page that read: “Queen’s fury as Harry and Meghan say: We quit.” 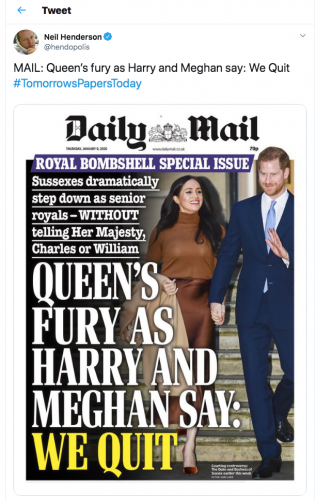 The left leaning The Daily Mirror was also scathing of the move, saying Harry was guilty of hypocrisy. It lead with the front cover, “They didn’t even tell the Queen.”

Inside, its Royal commentator Rachael Bletchley wrote: “Harry has selfishly turned his back on the institution she has fought to modernise and secure for him and his children.” 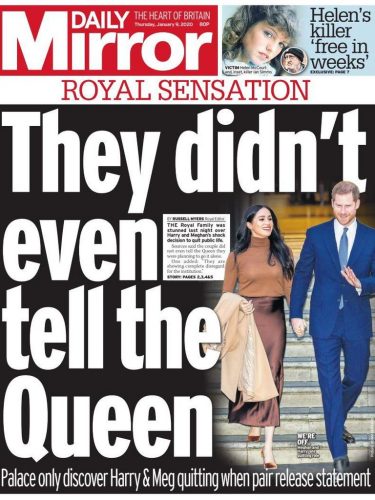 Meanwhile, over in the US, The New York Post arguably won best cover after it parodied the two in a cartoon showing the Prince and his wife as everyday people sitting on the couch at home leading the “commoner” life. 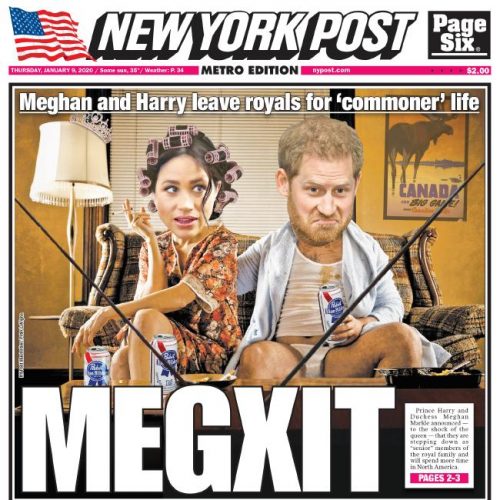 The Guardian – which typically avoids Royal news – simply led with the a front cover that read: “Harry and Meghan to ‘step back as senior Royals'”.

Guardian columnist and Royal watcher writer Hadley Freeman said UK’s tabloid press and the Royal family itself had left the couple “no choice”.

“For truly exclusive insight into Harry and Meghan’s thinking, the Daily Mail need not have looked any further than its website’s front page on Thursday morning: the site ran no fewer than 14 stories tearing into the couple,” Freeman wrote. “The same commentators who sneered at Meghan for being dazzled by royalty now condemn her for wanting to leave it.”