In this guest post, Matthew Simms (pictured below), Senior Experience Strategist at whiteGREY, argues the ongoing attacks on Gen Ys are just prejudice and, worse, a menace to advertising’s creative process.. 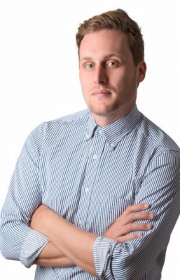 I say Millennialism, as it’s unfortunately become the infamous hallmark of the century-old epidemic, but it could also be Gen Xism or Baby Boomerism. We’re rightly disgusted about other forms of discriminatory stereotyping, so why do we accept lazy generalisations based on broad brackets of years when people were born?

As we tear towards peak Millennial my hope grew that this nonsense would stop. But apparently people keep being born and now we have Gen Z. We can therefore look forward to the coming wave of next generation insight – a taste of the near future is the headshaking Washington Post piece “Millennials disrupted the system. Gen Z is here to fix the mess”.

In case you’re having furious debates about the exact boundary of the Millennial, the Pew Research Center defines it as anyone born between 1981 and 1996. Stop and think how truly ridiculous it is to categorise people this way. A 37-year-old and a 22-year-old. People at very different stages of their life who are often watered down to the same empty figure who for some reason must share the same situation, beliefs and behaviours.

And here’s the problem: these generational brackets are used as a tool by people to understand people and then create for people. They’re used by businesses to shape products and services, by research firms to build reports and consult, by agencies to develop communications, ideas and experiences.

Millennialism is rampant and it’s deeply flawed. Insight gleaned from generational research, and more broadly age and demographics, is black and white, whereas the real interesting stuff happens in the grey. It oversimplifies the complexity of people. Which means we don’t actually understand people. Which means what we create won’t connect with people.

The problem of Millennialism, and therefore not understanding people, stretches from Pepsi’s jaw dropping Kendall Jenner debacle [Millennials do rather enjoy a good protest, right?], to the world’s largest supermarket basing its ecommerce strategy around supposed Millennial needs, to publications being launched, to politicians designing policies for wannabe Millennial homeowners because they’re apparently avocado addicts.

There’s six ways to break free from the comfortable yet dangerous space of Millennialism.

What circumstances do these people face? Find out what impact it has on them.

A bank we worked with received a burst of calls every Friday afternoon, it was people checking their balance to figure out what they could blow that weekend. Knowing this meant we could develop experiences to help these people manage money better.

What is it that people are doing that impacts their outlook or beliefs? Find out why they’re doing it.

UK supermarket Sainsbury’s famously discovered people sleep-shop, they were stuck in a rut buying the same things due to a lack of inspiration. “Try something new today” inspired simple food changes, got people to spend an extra £1.14 and grew revenue by £2.5 billion.

An education business we work with has higher drop-out rates amongst students that miss their first assignment’s deadline, it’s because they don’t understand what’s expected of them. Knowing this means additional support could be given to increase retention.

What do people think and find out why do they think it? What is their mindset and unspoken motivation?

A parenting brand we work with doesn’t try to reach Millennial mums like many others, but instead looks at first-time and experienced parents, no matter the age, as the mindset is different: trepidation vs. confidence.

Airbnb previously framed its audiences as generational groups, its core the hipster Millennial, but it’s growth in consideration plateaued. It instead looked for a deeper motivation why people would choose Airbnb – when travelling they want to experience life as a local. The resulting “Don’t Just Go There. Live There” creative platform skyrocketed awareness and boosted market share.

What are the things that influences what they do and happens in their life?

We worked out the audience for a car wasn’t necessarily the young but those ‘free’ from the responsibility of children. It flipped our approach to how we spoke to and reached prospective buyers and in doing so we secured record leads.

What are the bonds that large and sub groups of people share? What are the reasons why these people come together?

Nike’s projects 80 per cent of its growth will come from 12 global cities – one of them is London. So how do you take a brand representing American athleticism and make it relevant to London life? It’s urban epic, “Nothing Beats a Londoner”, represents the gritty attitude and unbeatable determination of London street culture. It quickly became one of its most talked about films [before it was pulled due to a bit of legal bother].

What happens to people who have polar opposite experiences?

Work we did for a health insurer looked at the incredibly health and the chronically unwell, the people who only go in store and those who solely use their phone. Finding extreme experiences inspires divergent ideas.

We need to take a stand against Millennialism and shift beyond the lazy fixation of using generation to frame insight. Reject any hint of this sluggish thinking in presentations, reports or briefs. It leads to generic, bland, and ultimately meaningless work.

Go deeper and look for the truth in the messy factors that actually enables us to understand people.

Only then can we hope to create meaningful solutions