The Brand Finance Football 50, released today, is an annual study conducted by brand valuation and strategy consultancy Brand Finance. Football’s biggest clubs are put to the test to determine which command the strongest and most valuable brands.

As was to be expected, the top 50 was dominated by the European football teams. In fact, no teams outside of Europe featured and no Australian teams were anywhere to be seen. The famous Manchester United came out on top and is estimated to be worth $US1.206 billion. The full list of the top 50 is as follows: 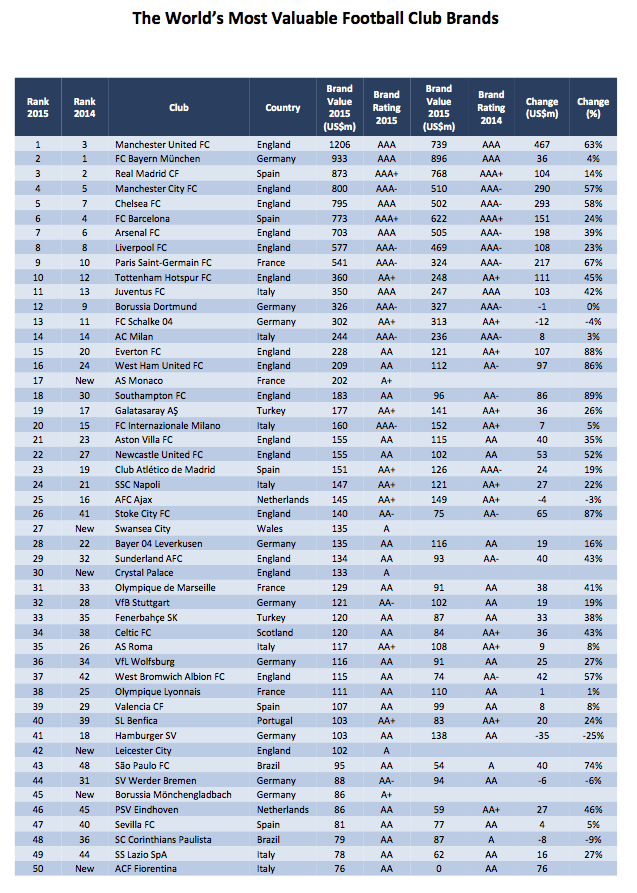 Despite another season without silverware, Manchester United has reclaimed its position at the top of the Brand Finance Football 50, knocking Bayern Munich off the top spot. The Red Devils have become the first billion dollar football brand, with 63 per cent growth bringing total brand value to $US1.2 billion.

Barca’s resounding 3-1 win over Juventus caps a year of stunning successes (including La Liga title and the Copa del Rey) in which the club has made history by becoming the first to win the treble twice. Saturday’s game alone added $28 million to Barca’s brand value, contributing to a overall increase on 2014 of $US151 million dollars, bringing the total value of the brand to $US773 million.

However as glorious as Barca’s record may be, it simply has not been able to harness its brand to the same extent as rivals Real Madrid (whose brand is $US100 million more valuable) or the rapidly growing English teams. Man City and Chelsea have both overtaken it for the first time, pushing Barca into 6th place in the Brand Finance Football 50.

Thanks to sporting success and a squad stacked with legendary figures such as Messi and Neymar, Barcelona actually has the strongest brand of any club, rated AAA+ by Brand Finance. However ‘brand strength’ only reflects the notional potential of the brand. For a club’s brand to generate income a business team that is as star-studded and tactically brilliant as the team on the pitch is required. That is how to build brand value.

Brand Finance CEO David Haigh comments, “Manchester United’s success has been masterminded by Ed Woodward, the Ronaldo of football’s commercial sphere. As Sir Alex Ferguson developed United’s world-beating reputation, Woodward (and United’s owners the Glazers) capitalised on the brand’s growing power to establish a worldwide fan-base and a range of sponsorship deals unrivalled in their number and value.” That focus on extracting value from the brand, combined with United’s footballing success in the recent past, has allowed Woodward to mitigate the impact of the last two seasons’ mediocre results.

Manchester United received another boost to its financial potency this year thanks to a record-breaking new deal for the broadcast rights of the 2016/17, 2017/18 and 2018/19 Premier League seasons. The deal is worth £5.1 billion ($US7.8 billion) for the UK rights alone, closer to £9 billion ($US14 billion) for the global rights, representing a 70 per cent increase on the last round. The news saw Manchester United’s share price immediately jump five per cent. The deal has been a boon to all Premier League clubs however. Each will receive close to £150 million ($230 million) a season, which has seen their brand values surge this year.

This year’s Brand Finance Football 50 again highlights the market challenges for Australia’s football codes. Brand Finance managing director, Mark Crowe said, “The AFL and NRL have dominated the commercial landscape in Australia and will continue to leverage their market strength especially in regard to media rights. However market expansion will necessitate an increased global outlook. The NRL has the opportunity to take advantage of the renewed interest in international rugby league, the unique rivalry in State of Origin and the World Club Series.

“The stronger global footprint for rugby union and soccer (football) conversely presents challenges for Super Rugby and the A League given that the market forces for salaries makes it near on impossible to compete against what is on offer in Europe and increasingly Asia.”