In this opinion piece, Sharon Givoni (pictured below), a Melbourne-based intellectual property lawyer, says there’s plenty of lessons to be learned for brands in the current UGG brouhaha…

Anyone in marketing would know that it is always a good idea to register your trade marks to protect them for your business. In fact there’s a little saying that’s been going around, especially when it comes to the topic of UGG boots: “Don’t be an Ugg. Register your trade mark before it gets Ugg-ly” 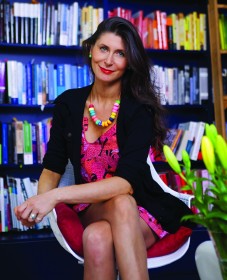 While it seems that there are many trademarks registered in Australia using the word “UGG” in some form or another, with owners happily using them, the situation is not so straightforward when it comes to use of the word in the US.

The key message arising from UGG trade marks is that in a global economy, it is important to protect your trade marks in any countries overseas where you may want to sell your products.

Fights over this word have had a long history. Way back in the early 70s, Australian surfer Shane Stedman registered the name “UGH-BOOTS” as an Australian trade mark for sheepskin boots.

Then, in the late 70s, another Australian surfer, Brian Smith, bought several pairs of the boots to the US and sold them in New York, eventually setting up his own company called Ugg Holdings Inc.

After over a decade of using and promoting the “UGG” brand in the US, Brian Smith sold Ugg Holdings Inc. to US company, Deckers Outdoor Corporation Pty Ltd, who then started selling the shoes in the US and registered various US trade marks for the word “UGG”, as well as a logo containing the word “UGG”.

This is pretty much where the drama began. In 1999, Deckers began sending out threatening letters to Australian UGG boot manufacturers requesting that they stop selling the boots by reference to the brand name “UGG”. They had their UGG trade mark safely registered in the US which entitles them to exclusive rights their.

Hardly surprising then that the Australian companies were unhappy about this development and grouped together to form the Australian Sheepskin Association Inc.

The association claimed that the word “UGG” had been used all the way back since the 1920s and no one, including Deckers, should be able to own it for themselves.

At the time, the general manager of a major sheepskin boots company was quoted as saying that the word UGG was “as generic as a meat pie or tomato sauce”. Another UGG boot manufacture lamented that if they had to stop using the word “UGG”, they would basically be prevented from “a right to own their own history.”

This comes down to the basic question of whether “UGG” is a brand name or generic term. In other words, does the word UGG automatically refer to a flat-heeled pull-on soft sheepskin boot or does it refer to a specific brand?

The whole thing was resolve – albeit indirectly – when the Australian Trade Marks Office removed the “ugh” and “ugh-boots” trade marks for non-use. Further, to date, the Australian trade marks register shows that there are approximately 140 registered trade marks incorporating the word “UGG”.

The issues with the use of the word “UGG” resurfaced in 2010, the court ruled that Luda Production Pty Ltd had the right to use and register three different “UGG AUSTRALIA” trade marks in spite of Decker’s opposition to all three, based on factors including reputation and prior use (Decker has owned an UGG trade mark in Australia since 1999).

The difficulty with all of this is in the international use of the word “UGG”. Despite anything that happens in Australia, the fact of the matter is that Deckers still owns the UGG trade mark in the US and the argument they would run is that people in the US would recognise the word “UGG” exclusively with their shoes.

Australian companies may be fine to manufacturer and sell in Australia, but then will run into issues when the start selling online to international customers. Even if an Australian company does not have a shop front or is actively marketing to US customers, if they do in fact sell and ship there, it could be trade mark infringement.

This is what has happened to Eddie Oygur, of Australian Leather who has found himself in hot water with Deckers for selling online to US customers.

Further it could happen to any other manufacturers of UGG boots that come up if they try to leave the safe shores of Australia, and businesses that could spend thousands defending any action brought by Deckers.

The lesson is that, if you do have a trade mark, you only do you need to be protected and registered in Australia, but also in any others countries you will be using it in.

The other thing to bear in mind is that iconic words can be trade marked even though they might seem cultural, iconic or generic, including:

What can we gather from all this? One, is to think ahead.

If you have an Australian brand with plans to expand overseas, register it as a trade mark in all relevant countries. Otherwise, someone else can get in first in that country.

Two, is to take steps that ensure your trad mark does not become generic. Use the ® symbol with it once it is registered and if others use it despite your trade mark registration seek advice to see if you can take legal steps to stop them.

This article was written by Sharon Givoni, a Melbourne-based intellectual property lawyer that advises clients in many areas of the law, including branding and marketing Australia-wide. She has recently written a book titled “Owning It: A Creatives Guide to Copyright, Contracts and the Law”, which has been a huge success and she can be contacted on: 0410 557 907 and info@iplegal.com.au.