To mark the arrival of the new Discovery Sport in Australia, Land Rover has created a ‘Discovery Sport Adventure Gene Zone’ in the heart of Melbourne. The activation leverages Land Rover’s ‘Adventure Gene’ campaign, built around the idea that one in four people have a genetic variant DRD4-7R that makes them more curious, less restricted by boundaries, with a greater urge to explore.

Located in Federation Square, the activation encourages passers-by to test their adventurousness by posing for a photo in an ‘Adventure Gene’ booth. The photo is then projected on the massive adjacent electronic billboard, opposite Flinders Street Station. 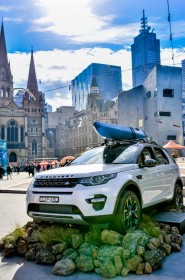 Consumers also have the chance to interact with the new Land Rover Discovery Sport and to win a luxury weekend away in one when they have their ‘Adventure Gene’ captured at the photo booth, using the hashtag #InTheDNA. Entry is open to fans on Facebook, Twitter and Instagram, as well as at the activation.

Accompanying the activation is strategically placed out-of-home advertising on the nearby Swanson Street digital site and adjacent tram station Adshel panels. The activation is part of the launch campaign for the Land Rover Discovery Sport that kicked off in TV/OOH/Digital/Print this weekend for the Australian start of sales. 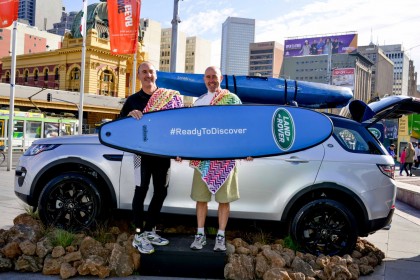 Says Tim Krieger, general manager, communications and public relations, for Jaguar Land Rover Australia, “Land Rover is launching the new Discovery Sport with a campaign that champions adventure and celebrates the unique capability that is in the DNA of every Land Rover, allowing Land Rover drivers to make more of their world.”

“Brand experiences are on top of our agenda for Land Rover” says Jasmin Bedir, managing Director of Spark44, the creative agency behind the activation. “There is no better way to promote a brand that stands for outdoor adventure than with an actual experience.”