What is in the water in New Zealand? Print marketing and design is pushing the boundaries and we took a deep dive into the creativity and success of brand marketing across the Tasman.

When it comes to print marketing, New Zealand has a long history of creativity, using everything from shredded dollar bills to posters you can play. The addressed mail industry in New Zealand now has an annual revenue of $41m, while unaddressed mail is an impressive $47m (ASA, 2019), and companies and businesses across the country are using print in all its forms to reach new and existing customers to grab and keep hold of their attention.

With the majority of New Zealanders having no idea how much money they were spending on interest, the Bank of New Zealand (BNZ) wanted to shock them into rethinking their home loan. Knowing that every day billions of dollars in old banknotes are destroyed by the world’s major banks and turned into waste, the key idea was to make this waste valuable again.

So, working with the Reserve Bank, $1,000 of real shredded cash was put into bundles and delivered to homeowners across the country, along with a letter explaining how a BNZ Tailored Home Loan could help them save thousands on a typical mortgage. This campaign not only saved New Zealand homeowners hundreds of thousands of dollars, it increased BNZ mortgage lending by $600 million and home loan enquiries by 13%. Not bad for a load of waste paper. 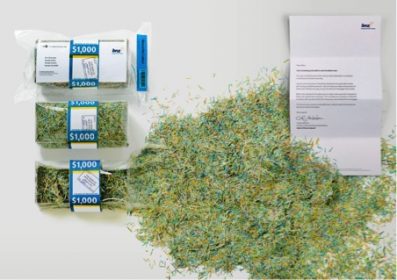 Ford – How to break up with your Ford Ranger

When launching their new Ford Ranger Wildtrak, the car company had a problem on their hands: how to convince a nation of ute obsessives to let go of their current model and trade up to a top-spec Wildtrak? Their advertising company decided that a direct mail campaign was the way to go – and a funny one at that.

The agency created a book that kept its tongue firmly in cheek, pressing all the right emotional buttons to exploit the bond between a bloke and his trusty Ford Ranger. Designed in the style of a car manual, How To Break Up With Your Ford Ranger offered advice and support for owners, with fill-in-the-blanks break-up letter templates, mood-lifting music recommendations, self-empowerment proverbs, a built-in box of tissues and even a money-off voucher to soften the blow. 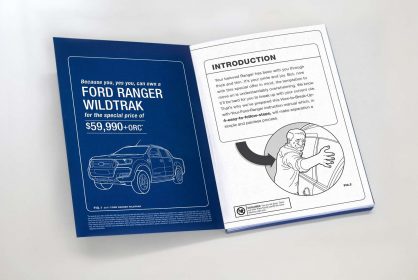 As the primary sponsor of New Zealand Music Month, Beck’s wanted to raise awareness of their brand and their connection to music and the arts, so commissioned a leading electronics company to create the first ever commercial outdoor playable poster.

The poster was produced using conductive ink, which was printed onto the reverse of the paper to create a series of capacitive touch sensors which register electrical signals from the user’s fingers. Using a processor and an 80W speaker embedded into the poster, the budding composer could create their own music for everyone to hear.

A total of 100 posters were created and installed at 60 sites around Auckland, Wellington, Christchurch and various towns across the country, and proved to be a massive hit with the public. The campaign also demonstrated the tactility and interactive potential of print, with thousands of music fans queuing up to play this unique piece of print. 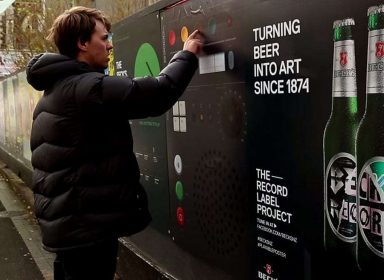 It’s no secret that the traditional newspaper industry has faced a number of challenges in most countries around the world – and New Zealand is no exception. The Newspaper Publishers’ Association wanted to capitalise on the success of the All Blacks when they won the World Cup, celebrating their victory while promoting the newspapers that carried the news of their success on an international scale.

The Association created a full-page press ad, which allowed readers to turn the entire newspaper into a mailing they could send to friends and family anywhere in the world to share the experience of national pride. All they had to do was fold the paper, add a message and a few stamps, then post it.

This idea was pure genius, not only spreading the news of the All Blacks’ victory, but getting the fans to do the Association’s work for them. It’s estimated that over 1,000 newspapers were sent around the world, providing a physical way for people to connect through a highly emotional event.

Whoosh – Half a bill

Telecom company Woosh wanted to take advantage of the customer backlash against national telecom brand and let customers know they could be paying half as much for their phone with one of their phone-and-broadband packages. However, in a crowded letterbox market, they needed to generate impact and grab attention.

On a tight budget, Woosh created a straightforward piece of door-drop mail, but then made it interesting by physically ripping it in half before dropping it in 50,000 mailboxes around Auckland. The mail managed to capture the negative sentiment around their rival’s prices, as well as neatly represent the portion people would save by switching to Woosh.

The results during the first campaign period were the best ever for Woosh, with a record number of new accounts opened each day. When the campaign got rolled out again, there was another significant increase in new Woosh customers – up to 62%, compared to an average 9.3% nationwide. 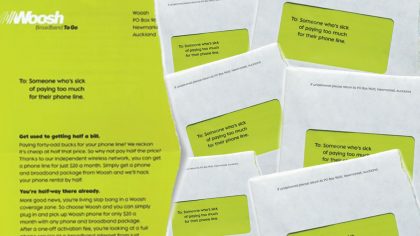