KFC has come out swinging and won a lawsuit against three Chinese companies for telling tall tales about the fried chicken company using “mutant chickens”.

You feel like chicken tonight? You wouldn’t have after seeing the hoax photographs that went viral in 2013.

The images showed freakishly deformed birds supposedly bred by KFC, and published with untrue claims about the origin of KFC’s three-piece feed.

But a Shanghai court has ruled in favour of the Colonel, fining tech firms Yingchenanzhi Success and Culture Communication, Taiyuan Zero Point Technology and Shanxi Weilukuang Technology, according to Reuters.

The firms have also been ordered to apologise to the finger lickin’ good chicken brand, and pay a combined $127,000. 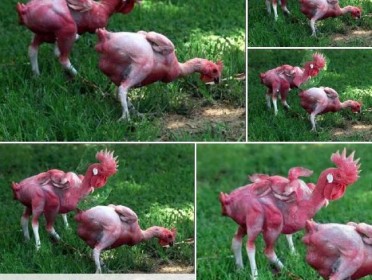 “These so-called ‘chickens’ are kept alive by tubes inserted into their bodies to pump blood and nutrients throughout their structure,” one hoax story had read.

“They have no beaks, no feathers and no feet. They grow with multiple legs and wings on one ‘chicken.’ Their bone structure is dramatically shrunk to get more meat out of them. This is great for KFC because it saves them money for their production costs.”

The story also cited a hoax University of New Hampshire study, which was later debunked by the university.

In a statement on its official microblog, the Xuhui District People’s Court said the three companies had “damaged KFC’s reputation” and “caused it economic losses” by permitting the allegations to be posted on their social messaging accounts.

The Shanghai verdict comes as Yum Brands, which operates KFC, is battling to keep its business in China afloat, with sales slumping in the wake of food safety scares, so naturally this hoax didn’t go down so well with KFC’s customers.

A spokeswoman for the Chinese arm of KFC’s parent company Yum Brand Cindy Wei told Reuters, “We brought suits against these individuals for making false statements about the quality of our food and we are pleased with the outcome”.

KFC spokesman Rick Maynard labelled the urban legend “ridiculous”, pointing out last year that it had been debunked multiple times.