Victoria’s Headlines features young journalists, their headlines and the date they ran and was rolled out over the long weekend via digital billboards, street furniture, Facebook, rock posters in the city, and Melbourne Cricket Ground LED signage – in addition to owned print and digital assets. The campaign aims to reinforce the value of the masthead’s journalists and its journalism as the most trusted voices of the state. 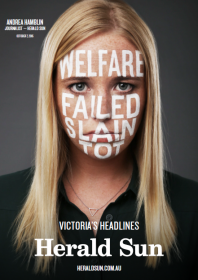 The Herald and Weekly Times executive general manager Peter Clark said: “We’ve been very heavy in market with retail and acquisition activity – with great success. It’s time to offer people a fresh way in to the brand and we think using our young talent and emblazoning their headlines on their faces differentiates this from other campaigns, delivers impact and showcases their passion. And the start of the footy season is the obvious time to do that for the Herald Sun. We’re very pleased with the campaign and look forward to audience response.

The Herald Sun has over 2 million print readers each week and almost four million engaging with the brand via print, tablet or mobile monthly. 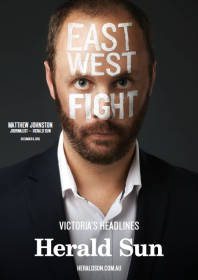 More than 30 per cent of journalists in the newsroom are under 35 years old. The campaign features some of the young talent responsible for creating the content that has earned the paper such strong support in Victoria throughout its 25 year history.

News Corp Australia general manager marketing in Victoria Kammeron George said: “There was a great commitment from our leadership team and our editors to do something different as well as an appetite to build the profiles of our young talent. We knew the campaign had to be arresting – in the same way a headline can force people to stop and read. We want people to look at the portraits and be affected in such a way that it makes them curious and causes them to build new associations with the people responsible for delivering the news each day.” 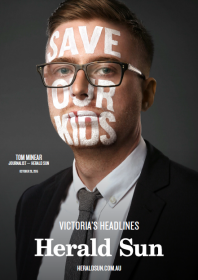 The Herald and Weekly Times general manager of sales Emily McGrath said: “This campaign presents the very essence of what the Herald Sun stands for in a contemporary and unique way. It’s unlike anything we’ve ever done and brings our young people to the fore; the very same people who campaign for change and make a difference in our community. By featuring our emerging journalists we are demonstrating our commitment to fostering upcoming talent whilst also resonating with our core target audience of young media professionals.”

The first phase of the Victoria’s Headlines campaign runs from today through until June. Cornwell was the creative agency and Herald Sun photographer Tim Carrafa, also in his 30s, captured the unique portraits.  Journalists that feature in the campaign are Andrea Hamblin, Tom Minear, Matthew Johnston, David Hurley, Brigid O’Connell and Elissa Doherty.

This phase of the campaign will be followed by subsequent iterations later this year that feature high profile reporters and opinion writers as well as causes the paper has championed.