Dr Amantha Imber (pictured below) is the Founder of Inventium, Australia’s leading innovation consultancy and the host of How I Work, a podcast about the habits and rituals of the world’s most successful innovators. In her latest guest post for B&T, the goodly doc gives top tips on how to innovate any business…

Is your organisation trying to innovate but finding it hard to get started? Or perhaps leaders are talking about it, but progress has been slow. Maybe you’ve witnessed some innovation theatre and seen an innovation lab pop up, yet innovation is yet to actually impact your bottom line? If you can relate to any of these common scenarios, your organisation might be making one of these five common mistakes when it comes to innovation. 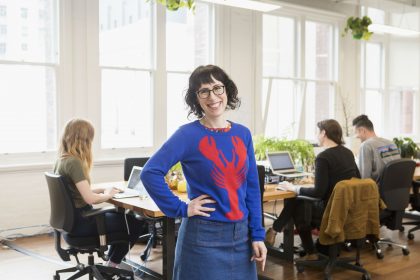 Embrace and celebrate all failure

Failure has gone from being a dirty word to a sexy word. People now wear failures like badges of honour and leaders shout “fail quick, fail fast” to anyone that will listen.

But here’s the thing: not all failure is good. In fact, some failure can be very very bad. Bad failure is when you spend a lot of time, money and resources on launching an innovation, and it flops. You might learn one or two things along the way, but you’ve wasted – I mean spent – such a lot of time and a lot of money doing so. This is usually something organisations want to forget.

A bad failure that always stuck in my mind came from a client of mine in the insurance sector. Just prior to starting to work with us, they launched a brand new product. The leadership team were excited about the idea, the business case looked amazing, and millions of dollars were pumped into the launch. And only a handful of consumers ended up buying it.

Use time as an excuse

Let’s be honest: Most people don’t work at 100% productivity for 100% of their work days. The reality is that we might work really well for a couple of hours, but the rest of our days are often spent in meetings, checking emails and engaging in other “shallow” work that isn’t actually creating much value for our companies.

For innovation to thrive, we need to whip our personal productivity into shape, which will then free us up with more time to innovate.

For example, most people multi-task their way through their day. We might be working on a report but doing a “just check” of email every 10 or so minutes. We might be dialled into a phone conference but checking emails during the more dull parts of the meeting.

This behaviour is costing us. Research by Professor David Meyer from the University of Michigan has shown the simple act of constantly switching tasks costs us up to 40 per cent of time. Imagine if we mono-tasked our way through the day instead – that would free up at least two additional hours every day to focus on innovation projects.

Blame your inability to innovate or task risks on regulations

You would be hard pressed to find an industry that is not bogged down in regulations or highly regulated. Yet every company feels that their industry is unique and somehow in a position where innovation is impossible.

But in every one of these industries, there are examples of disruptors who manage to find a way through.

America insurance company Lemonade, valued at half a billion dollars, is disrupting an industry that is awash with regulations. Lemonade breaks a lot of rules, such as using artificial intelligence to assess claims, thus enabling quick decisions – and also allowing the company to quickly uncover which transaction may be fraudulent. Recently, Lemonade decided to open-source the writing of its insurance policy to allow anyone to understand it.

Rather than lament the fact that your industry is heavily regulated, focus on what might be possible as opposed to what isn’t.

If you could relate to any of these mistakes or excuses, it might be time to have a long hard talk with your company to decide whether innovation is something your organisation is truly committed to.