Former Macleay College journalism student Sunny Burns has drawn parallels between himself and Schapelle Corby after being suspected of being this week’s Thailand bomber. 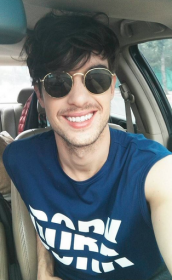 The 26-year-old model and actor teaches English in Thailand and has spent six hours being interrogated by police after turning himself in to police following an internet post drawing similarities between himself and the bomber, who was photographed wearing round specs and a garish yellow t-shirt.

Last night Burns posted on his Facebook page: “Still at Police Station. Police are looking after me. No idea what’s happening…I’m not a terrorist and the photo of the terrorist looks nothing like me. I would never wear those clothing – I’m a fashion blogger…I’ll keep you posted but please pray for Thailand. I’m Australian and we are battlers…I still love you Thailand.”

He is urging fellow Westerners to visit Thailand and help them rebuild the city and an hour after his first Facebook post followed up with: “Now in a police car and they are going to search my house for bombs. Police are great, doing their job and allowing me to use my phone. I really need a protein shake and a big hug. This is all because of social media and some jealous hater spreading gossip. Mum I’m safe and more worried about the people injured in the attack. Stay safe everyone and pray for Thailand.”

The bomb explosion went off in a shopping area called Central Word and ripped through he Erawan Shrine in the Ratchaprasong district of Thailand’s capital on Monday, killing 22 people and injuring more than 120.

No one has claimed responsibility for the attack yet but a post comparing Burns to the suspect, who was wearing the yellow t-shirt and a rucksack, started doing the rounds after CCTV footage was released.

Burns, who has walked runways all over the world and is represented by Vivien’s Model Management in Australia, found fame in Thailand after he started in TV series Keep In Touch with Gam The Star. He told Sunrise this morning he was so panicked about being a suspect, he didn’t even get legal advice before turning himself into police.

“I had to go straight to the police because they were looking for me,” he said. “It was that stressful that I had to go straight to the police and basically say ‘Hi I’m Sunny and I’m not a terrorist’. When I arrived [at the police station], I only know a bit of Thai, and the big scary boss he came and started screaming at me and I thought ‘oh my God, this is a set up. I’m going to be like Schapelle Corby but the terrorist version’.”