There’s no reason banner ads on the site have to be a creative afterthought. There are many ways brands can up the ante of those ads around the different webpages.

Now it’s time to turn our attention to those with clients in the travel, media and dining sectors.

If you’ve got travel-esque clients, first piece of advice is on the background colour. Blue was overwhelmingly used in banner ads at 33%, and rightly so, as it showed the highest conversion rate between all the other colours.

Green wasn’t far behind, with black coming up third.

Another two things to include in your ads are the length of stay and people. Rocket Fuel projected the reason ads that showed a length of stay did better than those that didn’t (and extra 227% better) was an issue of concreteness. “In other words, vacation packages with a designated number of days might reduce the abstraction of a far-away vacation and make the trip quantifiable.”

Similarly, less than half of the travel ads investigated showed people in them, but the study found when a human was included the ads had a conversion rate 152% higher.

However, while this may be the case the majority of the time, ads for Air Travel performed better when there wasn’t anyone in there.

If you mentioned price, with an offer, you’ve done well. 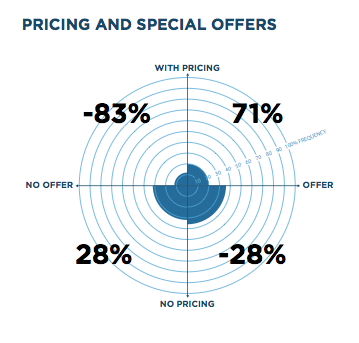 Except if you’re advertising hotels and lodging, in which case offers were great to include, but not static prices. 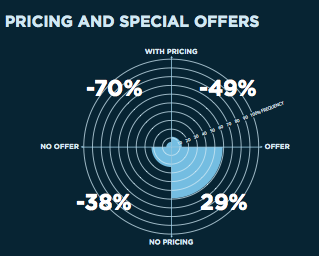 And if you’re trying to get people to subscribe to something, mention something else besides just ‘please subscribe here’. Actually feature some of the benefits, such as marketing services, recommends the study.

Having a call-to-action too is great, but don’t include ‘Try it now’ or ‘join now’ as these showed the conversion rates decreased. Instead use ‘find out more’ (which had a 309% increase in conversion rates) and ‘click here’ (52%+). 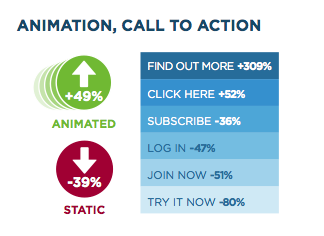 And now we come to food brands. First things first, a brown background appears to have the highest conversion rate out of all the colours, with white, grey and green equating similar numbers to each other.

It’s a “no brainer” that the food should be shown, says the research, but interestingly, showing a person in the ad lowers the conversion rate. “Moral of the story,” says the study, “When it comes to display ads, consumers would much rather see the food than the person consuming it.”

Coupons also lowered the conversion rate, as did showing the logo.

And if you’re keen to see which call-to-actions performed the best, check out the table below.