The nation – and the world, in fact – has been gripped this week over the mystery woman defecating out the front of Roxy Jacenko’s Paddington offices in inner Sydney.

Despite the mass media coverage following the release of CCTV footage of the Lycra-clad blonde woman, as yet the perpetuator is still at large; however, she now appears to be lying low on the public faeces front. 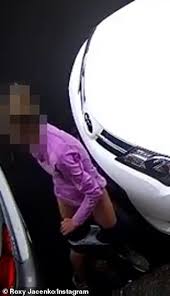 As reported on B&T yesterday, social media was abuzz with the prospects that the mystery woman was KIIS FM and Masked Singer host, Jackie O.

Sadly, O – who had previously admitted to losing control of her colon in Sydney’s eastern suburbs – denied the “Paddington Pooper” was her. And, in her defence, it didn’t really look like her either.

However, social media’s latest theory is that serial pooper is none other than Jacenko herself!  And, to give added spice to the theory, the woman does look a bit like a younger version of the 38-year-old PR maven.

So, has Jacenko pulled off the greatest piece of shameless PR and self-promotion ever (albeit, in a rather strange way)?

The theory is that Jacenko donned a disguise, defecated in front of her own office, posted the deliberately “grainy” videos to her Instagam account, deleted them and then got the sort of media coverage (arguably worth many millions) any PR person could only dream of.

Despite an ongoing police investigation, the defecator is yet to be publicly named and shamed. That said, finding attractive blonde women in Paddington is a bit like struggling to find a supermodel at a Victoria’s Secret parade.

When asked the question by News.com.au yesterday, Jacenko vehemently denied the pooper was her and that the whole thing was all a massive marketing stunt.

“I mean, if that’s the case I really am the PR queen,” Jacenko joked.

This week, Jacenko suggested that the woman may possibly have health issues and be in need of an adult nappy. Thus, it will be interesting to see if any of those brands suddenly join Sweaty Betty’s roster of clients.

And if the serial defecator isn’t found soon, it appears her identity may never be revealed. And that’s despite being splashed across nearly every news site in the country.

With all the exposure, it’s clear the woman has had to abandon her pooey protest.

Something Jacenko said she was happy about.

“I’m adjacent to a primary school where the kids come out, they play in the park, they run up and down with their scooters,” she told News.

“We’re in a residential, tree-lined street, why should we have to walk through shit to get to work or school? It’s not right. If the Instagram post is enough to make her stop and find her thrills by doing it in her own place of residence or work I’m a happy person.”