The owner of a Melbourne takeaway chicken shop is rightly furious after the side of his store was emblazoned with a massive outdoor ad for a newly opened KFC outlet down the road.

Owner of Chicken Central in Hawthorn, Jim Halley (below), was left livid when his store was adorned with the massive poster campaign that read, “KFC only 800 metres away. Bucket. Why Not?” 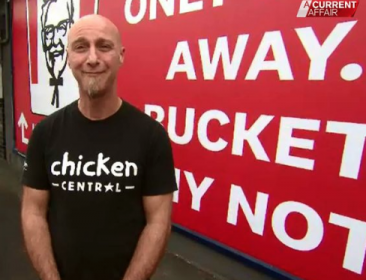 The billboard is reportedly owned by JCDecaux who has not commented on the placement.

“I’m hoping people will see that and say ‘Oh that’s typical big business, trying to push the small bloke around’ … and come in and support us. It’s way over the top.”

Meanwhile in an interview with Nine’s ACA, Halley said a number of brands had used the billboard to advertise but he reckoned KFC had “crossed the line in my opinion”.

The KFC billboard was erected after Halley complained of a Clive Palmer poster that had been vandalised.

“I put 90 hours a week into the business, and between the families and the guys that work for us, we all bust a gut to try to get the job done right,” he said in the TV interview.

“I just don’t understand how KFC or any other brand that sells chicken or direct opposition to us wants to come and put their billboard on our building.”

Halley added that he hoped “KFC will see the light, and they’ll go, ‘yep, let’s remove it'”.

However, there appears to be some good news for Halley this morning.

A KFC spokesman telling 7NEWS.com.au: “The billboard was part of a broader, short term campaign being run in the area by one of our local franchisees who was excited to promote the opening of his new restaurant on Glenferrie Road, and was in no way intended to harm Chicken Central.

“Since learning of Chicken Central’s concern, our franchisee has asked for the sign to be removed by the end of the week.”