A former AFL player has claimed he was a victim of “white supremacy” during an interview with The Project co-host and Gold Logie winner Waleed Aly.

Heritier Lumumba – who was known as Harry O’Brien during his AFL career with the Collingwood Magpies – appeared in a pre-recorded interview with Aly for Ten’s flagship news and current affairs show, which was aired earlier this month.

The interview revolved around a new film aired on SBS titled Fair Game, which features Lumumba’s personal experience of dealing with racism during his playing years. 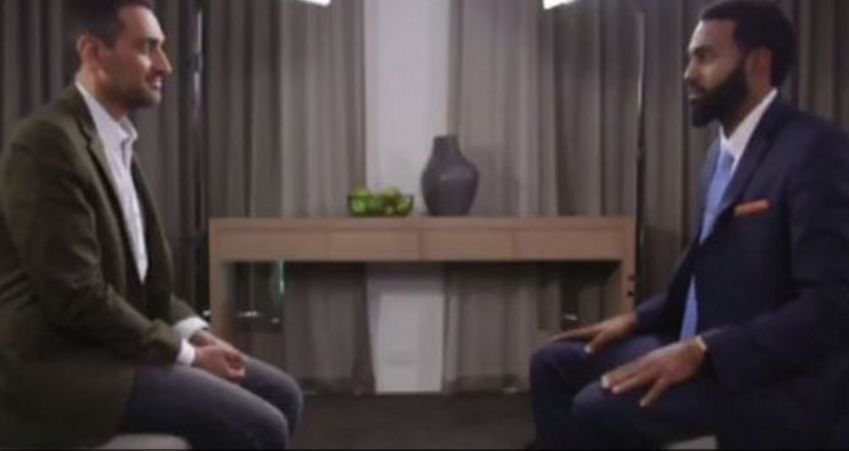 Aly and Lumumba during the interview

On Friday – just over a week after Aly interviewed Lumumba – the former AFL star posted a 2,000-word blog in which he claimed there was another side of the interview that wasn’t shown.

“Firstly, I would like to let it be known that I appreciate the profound impact that Aly’s presence, in Australian media, has on society,” Lumumba wrote.

“Regrettably, I made the error of going into the interview with the preconceived idea that we would both see eye to eye on the basic truths of racism/white supremacy. It pains me to admit, that my expectations of him were derived by his highly-acclaimed career as an academic and journalist, his ethnicity, and his faith in Islam.

“I made the assumption that he would skillfully deliver an objective, unapologetic stance in the face of racism. However, it is now very clear to me, that he and I have fundamental differences in our understanding of what racism/white supremacy is, and how it should be effectively dealt with.”

Lumumba took issue with some of Aly’s past efforts on The Project, saying he portrayed boxing legend Muhammad Ali as a “black supremacist” following his death.

The ex-AFL player also noted that Aly’s attempt to neutralise the backlash that his fellow TV presenter Sonia Kruger received after she suggested that Australia should place a ban on all Muslim immigration into the country was inappropriate.

Lumumba said he “winced” at Aly’s silence when watching his co-host on The Project, Peter Helliar, “disingenuously attempt to discredit my account of experiencing direct racism throughout my 12-year career as a professional footballer”.

“Helliar’s response chooses to ignore the known fact that he is in a culture that was built on a foundation of white supremacy and genocide,” Lumumba wrote.

“I am grateful that Helliar expressed what was on his mind because it brought to the surface a perfect example of how white supremacy functions.

Lumumba said he was also “horrified” by Aly’s inability to assert the facts into the interview when necessary.

“Aly was well aware that there were five players (including myself) who had simultaneously gone on record to highlight the same culture within the Australian Football League (AFL), that is indifferent to various manifestations of racism,” he wrote.