It appears Don Burke’s attempts to explain revelations he was a serial abuser of women has done more harm than good.

Appearing on Channel Nine’s (his former employer) A Current Affair last night, Burke told interviewer Tracy Grimshaw that he was a victim of a social media “witch hunt”.

Burke, 70, did admit to a string of extra-marital affairs during the peak of his national TV fame and blamed undiagnosed Asperger’s syndrome for his behaviour, something that has infuriated actual Asperger’s sufferers. 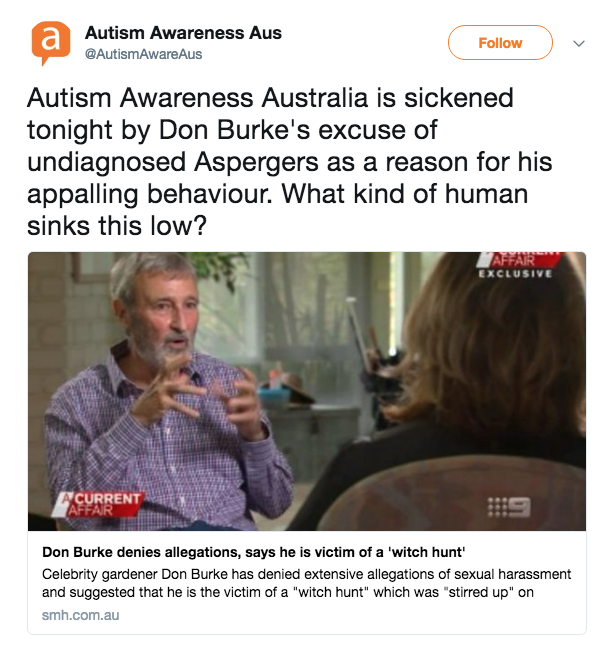 Burke told Grimshaw he had no recollection of the accusations against him, many dating back more than three decades.

“I’m not that man at all,” he said in the ACA interview. “I’ve got a lot of failings. Some of these things are despicable.

“I am happy to say to the people of Australia: this is my story, make up your mind if I’m the most evil person that’s ever lived, that’s your decision.

“If you can forgive me for the stupidity and the other things I have done then I am very grateful, but I think that’s their decision not mine.

“I have looked in the mirror and there’s a lot I don’t like. But that’s up to the people of Australia to decide can they forgive me or not,” Burke said.

On the string of affairs, he added: “I think I’ve got a bit to apologise for to my family and also to the people who supported Burke’s Backyard. There are things I’ve done that I’m not at all proud of.”

Meanwhile, Channel Nine may not escape the whole furore either after revelations senior management at the network turned a blind eye to Burke’s behaviour back in the 90s and fostered a culture of endemic bullying.

The Australian is reporting that Channel Nine could be exposed to a potential class action by Burke’s accusers and could be in serious strife if its found that Nine bosses were in anyway complicit.

The Oz quotes Shine Lawyers defamation special counsel Roger Singh who has said media companies could be in serious strife if they are found to have breached their duty of care to their employees.

Singh said: “You have to be able to demonstrate that there was a breach of duty of care and negligence on the part of the institution … on the basis that it knew, or ought to have known, the propensity of the ­offender to inflict abuse, but didn’t take appropriate action.”

The problem for Nine could well be comments in the press yesterday from senior Nine figures during Burke’s time with the network that appear to suggest they knew of his predatory behaviour.

The then CEO of Nine, David Leckie, said of Burke: “I’ve been trying to think of Harvey Weinstein-type people [in Australia] and the only one I can ever come up with is Burke. He was a horrible, horrible man.”

While Leckie’s predecessor at Nine, Sam Chisolm, said: “Don Burke was a disgrace because of his behaviour internally and externally” before adding he was a “terrible grub”.

To its credit, Nine has opened a full investigation into the allegations against Burke and encouraged any employee – past or present – to come forward.

In Nine’s defence, Burke’s Backyard was made by Burke’s own production company CTC Productions and not by Nine staff or at Nine’s studios.

In a statement to media yesterday, Nine said: “The allegations are extremely serious; the behaviour described is completely unacceptable and would not be tolerated at Nine today.

“Nine has zero tolerance of sexual harassment and workplace bullying and no employee should be subjected to this kind of behaviour. Everyone is entitled to come to work confident that our workplace is safe, free from harassment and unacceptable behaviour will be dealt with effectively.”