A report on the Seven-owned Yahoo Sports over the weekend has accused the broadcasters of NRL matches – Foxtel and Channel Nine – of running old crowd footage during broadcasts to make it look as though games weren’t being played to empty stadiums.

B&T has contacted both Channel Nine and Foxtel for comment regarding the allegations. Nine has denied any wrongdoing whatsoever, while Foxtel said it would offer a formal reply once it had more facts to hand.

Admittedly, the NRL has had a tough season with crowds for 2017, with the average number of people actually attending games this season now just 13,000 (versus the AFL’s 33,000).

However, poor attendances could be due to a number of reasons – a cold winter has kept Sydney fans away; plus, 2017 has seen extra games televised including Thursday night on Nine, a new 6pm game on Friday and a Saturday night game also on Nine. A high number of NRL games are played at the 80,000-seat ANZ Stadium which can make attendances look a little threadbare during broadcasts.

The allegations of audience tampering were made by the Seven Yahoo journalist Joey Riordon over the weekend and could well be seen as sour grapes for a network allied to the AFL. They were also repeated on Seven’s Twitter feed. 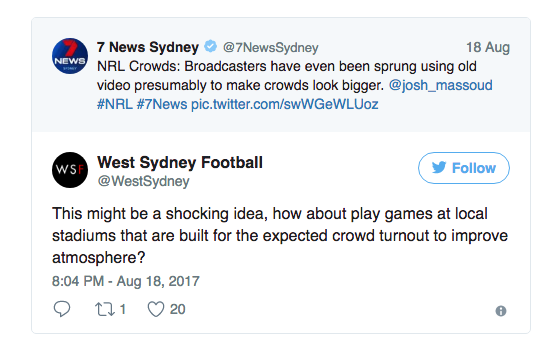 Riordon’s article (which you can read in full here) is vague in detail and careful not to accuse either Foxtel or Nine of directly running old crowd footage.

It does, however, infer the Rabbitohs-Dragons match from August the 4th may have been diddled with, as Riordon writes: “Two weeks ago the crowd crisis was at its worst during the traditional Rabbitohs v Dragons clash at the SCG, the turnout was embarrassing for the six pm clash.

“Those who did attend said the stadium was completely void of any atmosphere.

“Due to horrible crowds such as this one, broadcasters have been sprung using old video of crowds in order to make attendances look bigger,” the article read.

However, Riordon’s article has a stranger twist when an image (below) is used purporting to show the game in question with empty stands in the background. The only problem is the image shows ANZ Stadium at Homebush, when the game Riordon calls into question was played at the SCG. 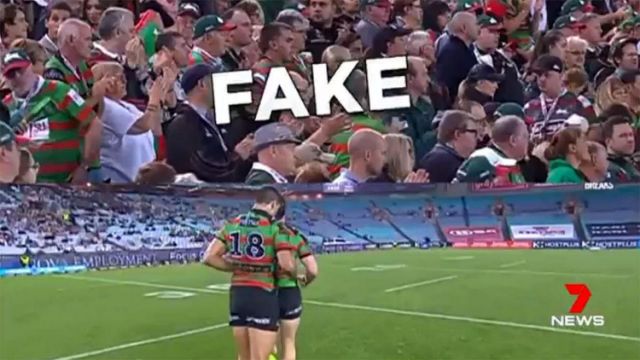 A second image (below) does appear to show a Dragons player standing against a sea of empty seats at the SCG with the Fox Sports logo clearly in the top right. 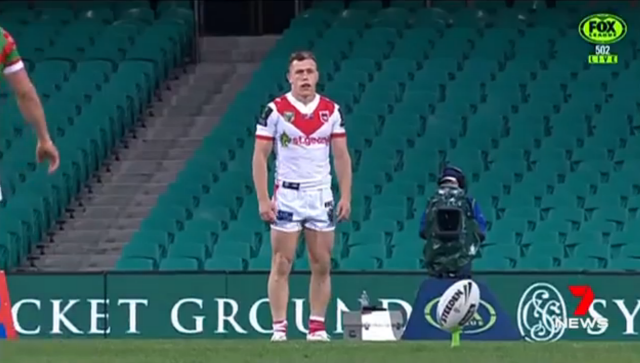