Burger King in the US is reaching beyond the grave to promote its new Ghost Whopper sandwich to be released in time for Halloween on the 31st.

The admittedly rather tasty looking Whopper comes with an eerie spectral-white bun and has been launched to coincide with the festival of all things ghouls and witches.

Sadly, the menu item is only getting a very short run and only in a few selected Burger King restaurants. 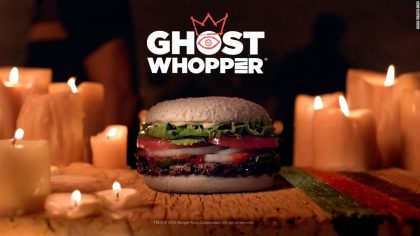 To promote the new menu item, Burger King has enlisted Riz Mirza, an internationally renowned clairvoyant who can apparently turn his body into a vessel for long-deceased spirits.

The new spot was filmed in Los Angeles’ Alexandria Hotel, which has long been rumoured to be haunted.

In the ad, Mirza enlists a bunch of sceptics and apparently becomes possessed with the spirits of the long since departed who get to air their views of the new Ghost Whopper from beyond the grave.

The ad, which Burger King prefers to call an “experiment”, is the work of acclaimed Miami indie agency David. Get set to be ever-so-slightly unnerved below:

Speaking of the spot, Burger King’s CMO Fernando Machado said: “We immediately liked this idea because it’s one that makes you go, ‘WTF?’.

“Can you imagine being in a room with your creative partners and being presented an idea that starts with, ‘We want to do a taste test with dead people’? That happened. And the idea immediately grabbed our attention and made us laugh.”