Wine may have toppled beer as our favourite tipple of choice years ago, but a new study has shown Australians are increasingly drinking spirits and it’s the Gen Ys knocking back the vodka and whiskey.

The study by Roy Morgan Research found that just under 70 per cent of Australians drank alcohol in any given four week period. That figure hasn’t changed since 2012.

Some 31.5 per cent of respondents also admitted “they don’t like drinking in pubs”. Although that may have to do with age, older drinkers preferring to get sloshed in the privacy of their own homes. 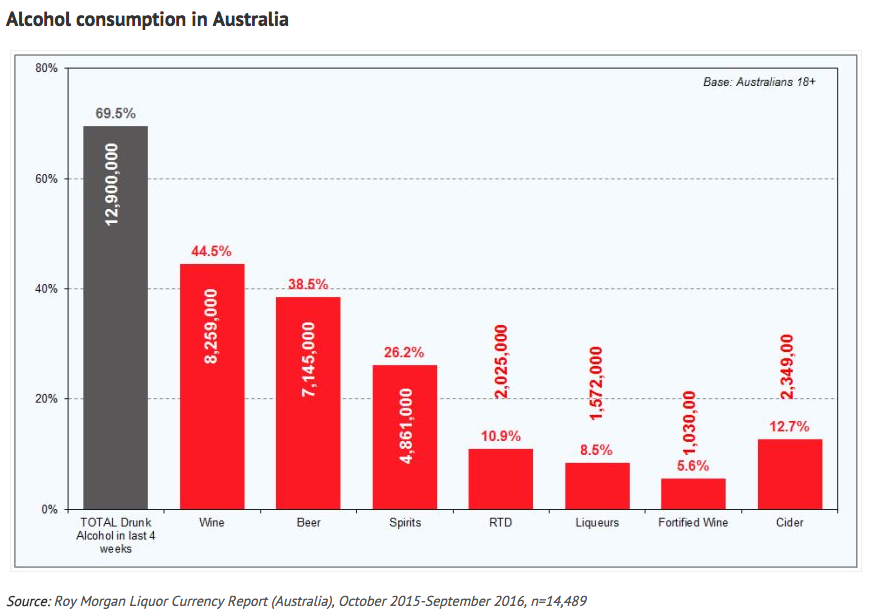 Beer is still predominately drunk by men, however, the interesting thing to come out of the study was spirit drinking among women. The brown spirits – bourbon, whiskey and rum – were all preferred by blokes, yet the white spirits – vodka and gin – had the ladies in front. 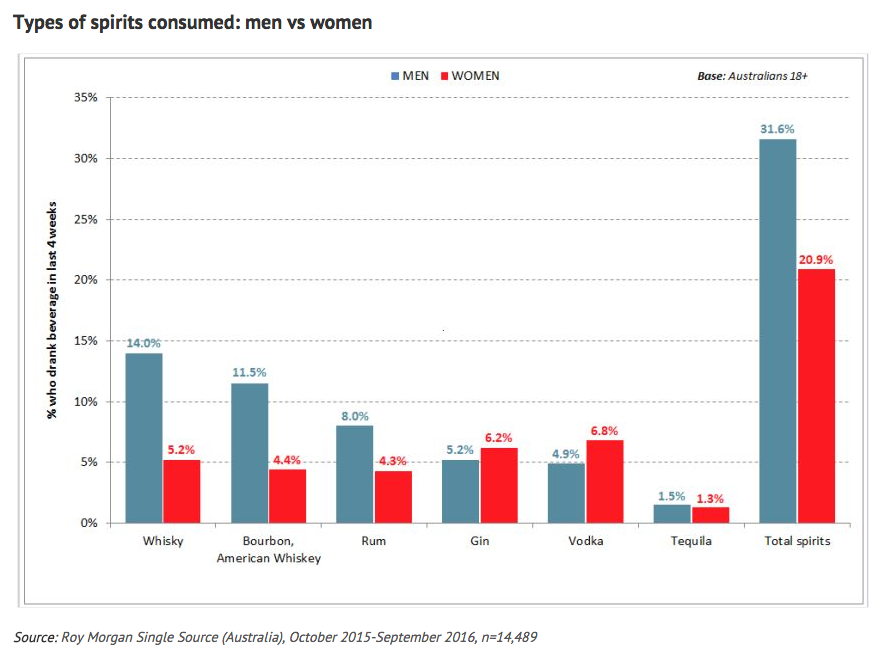 And, arguably in good news for agencies with liquor clients, the study found that it’s the Millennials drinking spirits. The study found spirit consumption most widespread among young drinkers aged 18-24 (37.0 per cent of whom partake in an average four weeks), and 25-34 year-olds (29.4 per cent). After that, consumption falls off, bottoming out at 21.4 per cent among the 50-plus age group.

Forty per cent of those surveyed who drank spirits admitted they did so due to their strength. Among bourbon and vodka drinkers, this figure is much higher, at 51.7 per cent and 49.8 per cent respectively!

Commenting on the study, Roy Morgan’s industry communications director, Norman Morris, said: “Alcohol drinkers are a diverse bunch, with a person’s liquor consumption often linked to their age, gender, socio-economic scale, ethnic background, attitudes and even state of residence. Even within a category, such as spirits, there can be considerable variation, as we have seen here.

“Although wine and beer are consumed in much larger volumes by many more Australians, spirits are still an important category in the liquor market. And at special times of year such as the Christmas-New Year period, liquor retailers can expect a surge in sales of these beverages, with customers buying them as gifts (a quick tip: white spirits for the ladies, dark spirits for the blokes!) or for their festive celebrations.

“For example, bourbon drinkers are the most likely of all spirits drinkers to ‘prefer pre-mixed spirits to spirits in a glass’ (22.7 per cent), in stark contrast to those who consume gin (5.6 per cent). What’s more, they’re also most likely to believe that ‘pre-mixed spirits are good value for money’ (17.7 per cent)—good news for pre-mix manufacturers (many of which use bourbon and American whiskey in their products)” he said.