It may now be into its 13th year, but Nine’s reno show The Block is still bringing home the bricks and mortar with last night’s finale scoring an audience of 2.104 million viewers according to the OzTam figures. That made last night’s show 2016’s most watched non-sports program for the year.

Engaged Queenslanders Will Bethune and Karlie Cicero, both 25, pocketed almot $800,000 over the reserve on their apartment to take The Block crown.

Speaking to News.com.au on their win, Bethune said: “We’d seen previous years of The Block, and some people walking away with $10,000 … We’re a young couple and we’d put our lives on hold. We’d just bought our first home and struggling to pay our mortgage while being on The Block was very difficult. We actually became quite broke and very stressed.”

The Block segwayed nicely into Nine’s 60 Minutes with 1.332 million viewers after it featured an incredibly awkward and sinister interview with Gable Tostee, the man recently acquitted of throwing his Tinder date, Warriena Wright, to her death from a 14-storey Gold Coast balcony. Tostee was reportedly paid $150,000 by Nine for his version of what happened that fateful night.

During last night’s program, recordings Tostee made on the night Wright died were aired and presumably showed her screaming just before she plunged to her death. Even more bizarely, Tostee said he felt there was no point calling for an ambulance once he realised what had happened to Wright and, instead, he went out for pizza.

Twitter soon lit-up with many people distressed at Tostee’s indifference. 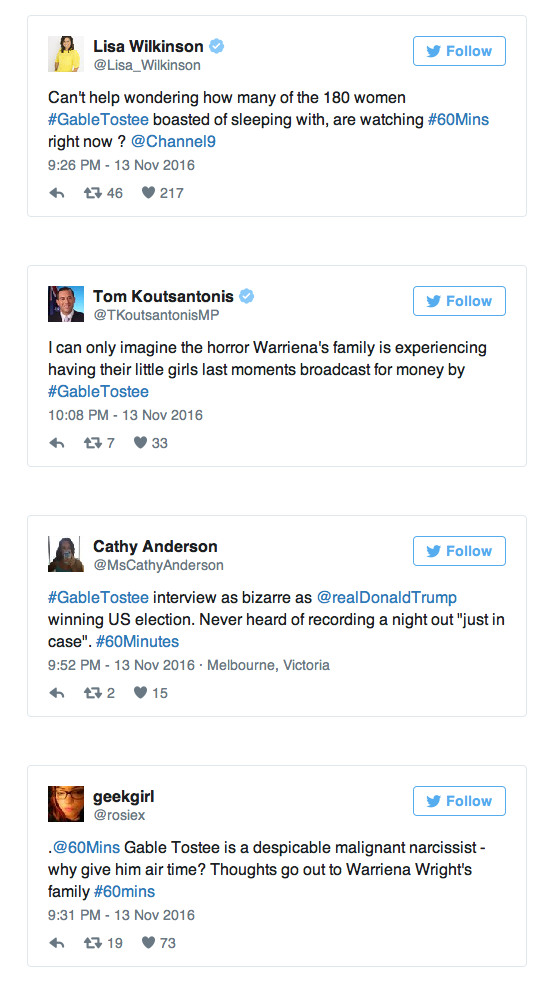 Tostee helped 60 Minutes into third spot on the Oztam figures for last night. Seven news pipped Nine’s news for fouth (1.088 VS 1.013 respectively). ABC news was sixth with 790,000 viewers and Seven’s current affairs show Sunday Night had 770,000 viewers – almost half as many as Nine’s 60 Minutes.