BBC radio broadcaster Danny Baker has been sacked over a now-deleted tweet which compared the new royal baby to a chimpanzee.

The post showed an image of a couple holding hands with a chimpanzee wearing a coat, with the caption: “Royal Baby leaves hospital”. 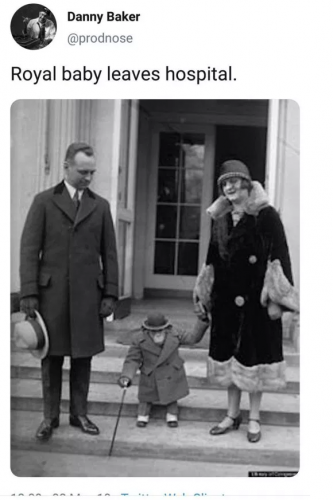 Markle and Prince Harry’s first child, Archie Harrison Mountbatten-Windsor, was born on Monday and is seventh in line to the throne. He is also the first bi-racial British-American royal.

“Was supposed to be joke about Royals vs circus animals in posh clothes but interpreted as about monkeys & race, so rightly deleted.

“Royal watching not my forte.”

A few hours later, Baker confirmed he had been fired from his BBC broadcasting gig in a call he described as “a masterclass of pompous faux-gravity”.

Just got fired from @bbc5live.
For the record – it was red sauce. Always.

“[The call] took a tone that said I actually meant that ridiculous tweet and the BBC must uphold blah blah blah,” he tweeted.

“Literally threw me under the bus. Could hear the suits’ knees knocking.”

In a statement to BBC News, a spokesperson for the corporation said Baker’s tweet was “a serious error of judgement” that goes against “the values we as a station aim to embody”.

However, not everyone was happy that Baker got the sack while Sky News host Adam Boulton didn’t suffer the same fate for a similarly racist tweet.

Less than a day before Baker’s tweet, Sky News host Boulton faced severe backlash after tweeting about an incident where Jews were spat at in Edgware Road.

He said in response to an incident where Jewish friends visiting London from Washington DC were spat at on Edgware Road for wearing yarmulkes: “No excuse but it is a Middle Eastern quarter”.

The backlash following his tweet was severe, and he later apologised saying: “My recent tweets are being misunderstood and misinterpreted. I apologise for any offence given which was never intended and will delete the comment.”

However, Twitter users are not happy that Baker was fired, while Boulton’s remark didn’t even get a response from Sky News.

Jack Mendel, web editor for Jewish News UK tweeted: “I hear Danny Baker has been fired from Radio 5live by the BBC. How to crash your career in a second…

“Astonishing… that Adam Boulton’s remark yesterday didn’t even get a response from Sky News, but Baker gets sacked.’”