In this guest post, Andrew Birmingham, editor of business site www.which-50.com, takes a look at recent data that says FinTech is about to serve the global banking system one large serve of disruption pie…

Digital disruption is pushing the global banking sector to a tipping point, according to a major study by financial sector giant Citi.

In the report, from Citi’s Global Perspectives and Solutions Group, the authors say developments in FinTech are driving the change — and they note the accelerated investment in digital-based services.

According to the study, “FinTech investments have grown exponentially in recent years: $19 billion of investment in 2015 was up two-thirds from $12 billion in 2014 and from low single-digit billions of dollars per year earlier in the decade. Given the recent shakeout in public equity markets, especially for marketplace lenders but also financial and technology companies in general, we may have a spill-over chill in private markets in 2016.”

These insurgents are pursuing the long-established pattern of disruptors in other markets: find highly profitable services in highly regulated markets where legacy applications and the casual laziness of incumbency have opened a very attractive gap in the market, and then drive a truck through.

The payments space, for instance, is intensely contested according to the study, while peer-to-peer lending is catching on rapidly in markets like China. “Peer-to-peer (P2P) cumulative lending volumes [in China] today amount to about three per cent of system retail loans — but if we were to extrapolate the recent growth rate through the end of 2018, the Chinese P2P market would be about nine per cent of total retail loans.” 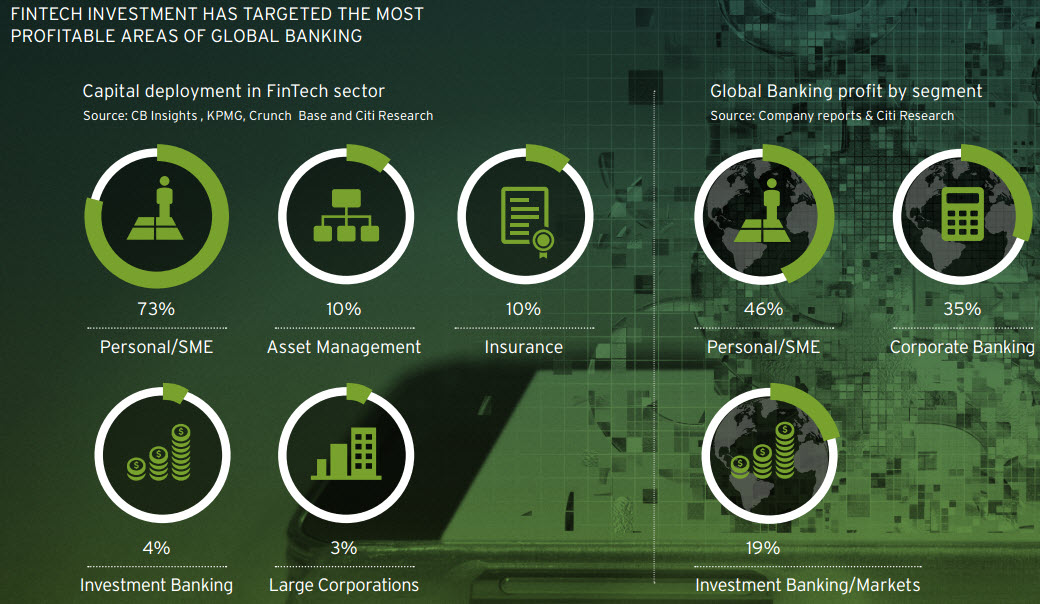 Across the globe, the analysts at Citi Research believe that personal and small and medium enterprise (SME) banking accounts for about half of the banking industry’s profit pool and — just as importantly — a higher proportion of the sector’s equity value. “Sifting through over a hundred FinTech private investments, we calculate that over 70 per cent of the FinTech investments to date have been in the Personal/SME business segments,” they write.

Perhaps one of the more interesting characteristics of the shift towards FinTech lead disruption in global banking is that western markets have until recently largely been immune. The action has been more in the developing economies, where consumers were often poorly serviced, and many not at all. For the “unbanked” in these markets, smart mobility has been a boon.

However, for banks in Western markets such as North America and Europe (and presumably Australia), the heat is likely to start rising uncomfortably quickly.

The authors point out that so far only a tiny fraction of current consumer markets in the developed world have been disrupted — but they say this is likely to rise.

The team under Greg Baxter, Citi’s Global Head of Digital Strategy, estimates that currently only about one per cent of North American consumer banking revenue has migrated to new digital business models (either at new entrants or incumbents) but that this will increase to about ten per cent by 2020 and 17 per cent by 2023.

They note, “We are in the early stages of the US and European consumer banking disruption cycle, therefore we note that this estimate is subject to considerable forecast risk. However, an open question remains as to whether incumbent banks in the US and Europe can embrace innovation, not just talk about Blockchain and hack-a-thons, before FinTech competitors gain scale and distribution.”

They contrast this relative lethargy with the situation in China which, they argue, is already well beyond the tipping point. “China’s e-commerce ecosystem is now larger than any other country in the world in terms of transaction volume. China’s top FinTech companies (such as Alipay or Tencent) often have as many, if not more, clients than the top banks. China’s top FinTech players (such as Ant Financial or Lufax) often have well-resourced parent companies in e-commerce or finance that can sustain larger and more balancesheet-intensive businesses than Western venture capital-funded rivals.”

The report identfies four reasons for the accelerated progress in China:

“While the US and Europe also share high mobile Internet savvy, their local Internet leaders have not as yet strategically focused on payments/finance and their local consumer banks are more sophisticated.”

According to the Citi study, the reality of a large unbanked population, along with relatively weak consumer banks and high mobile phone penetration, makes emerging markets ripe for FinTech disruptions. “Kenya has led the way for almost a decade now with M-PESA launching in Kenya in 2007 with currently 23 million active customers in 11 countries. In next door Somalia — associated in the past few decades with political instability instead of financial innovation — mobile money is having an arguably even more profound impact with about 40 per cent of adults using mobile money. 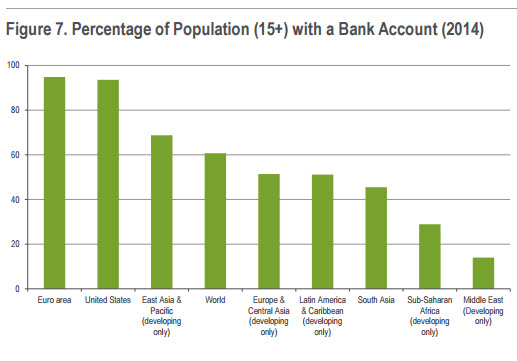 “Similarly, in the giant Asian countries such as India, Indonesia and the Philippines with an almost 400 million unbanked population, mobile money can also help solve a societal problem.”

And regulators in these markets are also playing a part, says the report. “Policymakers look favorably at FinTech as part of the solution to financial inclusion.”