The time Australians spent watching TV on conventional in-home TV sets rose more than an hour per month year-on-year (YOY) in Q3 2014, even as household take-up of internet-connected devices reached a new high.

The findings come from the latest Australian Multi-Screen Report, covering the third quarter of 2014.

The report also includes a special study on homes with internet-connected mobile devices: their presence, the extent to which household members share these devices, and the purposes for which they use them.

In Q3 2014 Australians watched an average of 96 hours and 58 minutes per month of broadcast television (including free-to-air and subscription channels) on their in-home TV sets – up one hour and seven minutes per month YOY.

This equates to a little more than three hours per Australian per day on in-home TV sets, consistent with average daily time spent viewing over much of the past decade.

91.6% of all in-home TV viewing in Q3 2014 was live – that is, viewed at the time the broadcast actually went to air. 8.4% was watched in playback, meaning viewers recorded the material using a device such as a PVR or DVR and played it back through their TV sets within seven days of original broadcast time.

Both live viewing and playback viewing rose YOY: by nine minutes, and 58 minutes, per month, respectively. 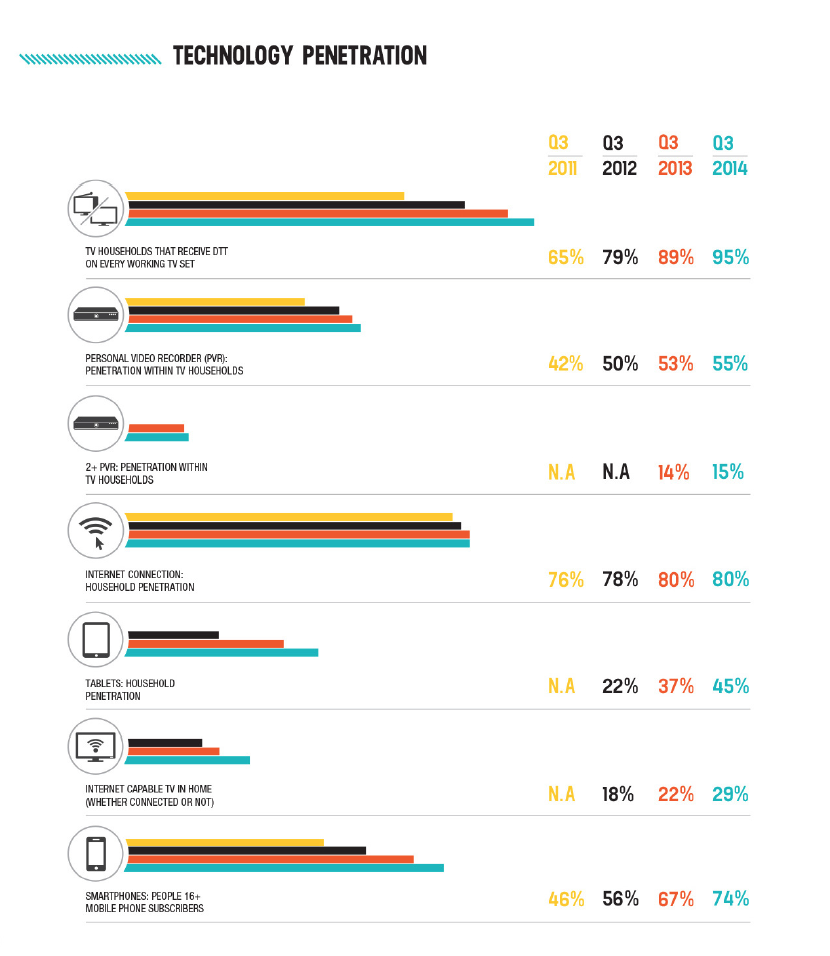 Household internet penetration has been steady for the past six quarters, at 80%.

The progressive take-up of internet-capable devices – including televisions, tablets, smartphones and in-home computers – is creating further opportunities to watch broadcast TV and other video content.

Viewing on mobile devices however remains small compared to that on traditional television sets, reflecting people’s preference to watch on the biggest available screen.

In Q3 2014 Australians aged 2+ spent an average 37 hours and 44 minutes online each month on home and work computers. They devoted seven and a half hours to watching any online video on PC or laptop computers (including broadcast TV content and other video), compared to five hours 18 minutes in Q3 2013.

74% of Australians aged 16+ own a smartphone, compared to 67% in Q3 2013. Across the Australian online population aged 16+ people report spending one hour 56 minutes per month watching any online video on a smartphone (Q4 2013).

29% of homes have internet-capable televisions (i.e., ‘hybrid’ or ‘smart’ TVs – whether actually connected or not), compared to 22% a year ago.

While the increase in average monthly time spent viewing broadcast television on in-home TV sets in the quarter was mainly driven by children under 12 and people aged 50+, all age groups continue to spend the majority of their viewing time watching broadcast TV content on their in-home TV sets. 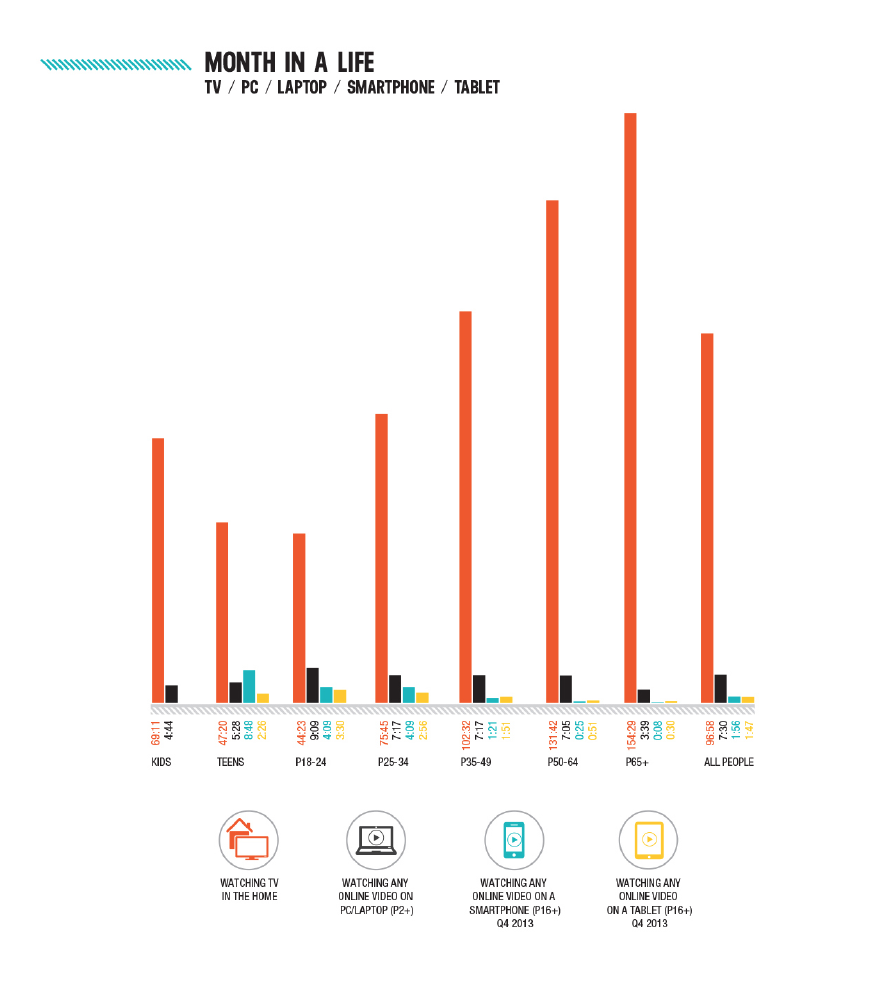 To understand how internet-connected mobile device users (tablet and smartphone users in particular) use and share those devices with other household members, a special study was conducted in September, 2014.

1,800 people aged 14+ living in households with access to one or more internet-connected mobile devices were asked:

Study participants were nationally representative by state, age and gender.

Among the special study’s findings:

o    People 35 and older are more likely to share their tablets with children under age 14 than are people under age 35.

The findings of this special study of people living in mobile internet-connected device households are consistent with research presented in earlier editions of the Australian Multi-Screen Report.

While audiences increasingly watch video content on mobile screens, such viewing is not the primary activity for which people use their internet-connected mobile devices. Moreover younger people are more likely to view any video on tablets and smartphones than are older age groups.

Deborah Wright, regional TAM chair, said: “Regional TAM households continue to deliver strong ‘live’ viewing results in comparison to the national average. The Q3 Australian Multi-Screen Report’s study on internet-connected mobile devices in the home show-cases some interesting findings on how we use and share these devices in our homes.”

OzTAM CEO Doug Peiffer said: “For all the changes and new options viewers have, television is still the centrepiece. Live TV viewing is level year-on-year, playback is up by nearly an hour, and people are spending more time with their television sets overall, because TVs are more versatile than ever. On top of their TV viewing time, Australians increasingly use their televisions to play games, watch DVDs or internet-delivered video, browse the internet, or playback TV content they’ve recorded beyond seven days from original broadcast. Such activities underscore the strength of TV and reinforce its position as the household main screen.”

Nielsen’s senior vice president, cross platform audience measurement, Erica Boyd said: “As people increase their overall time consuming content across screens, marketers have more opportunities to seamlessly connect with people in a way that is respectful of their time, relevant and interesting.”