In recognition of the growing influence of national image on the success of both companies and national economies, valuation and strategy consultancy Brand Finance has once again evaluated the 100 most valuable nation brands in a new report.

Despite its brand value dipping seven per cent to US$1.3 trillion over the past 12 months, Australia has managed to hold onto 10th position for 2016.

The US was unsurprisingly the number one-ranked nation, growing its lead in brand value by four per cent to US$20.6 trillion. However, the report noted that this modest growth may be under threat.

“In just over two weeks, the US could be led by Donald Trump, whose xenophobic stance and protectionist rhetoric threatens to antagonise businesses, prospective foreign workers, students and governments,” it said. 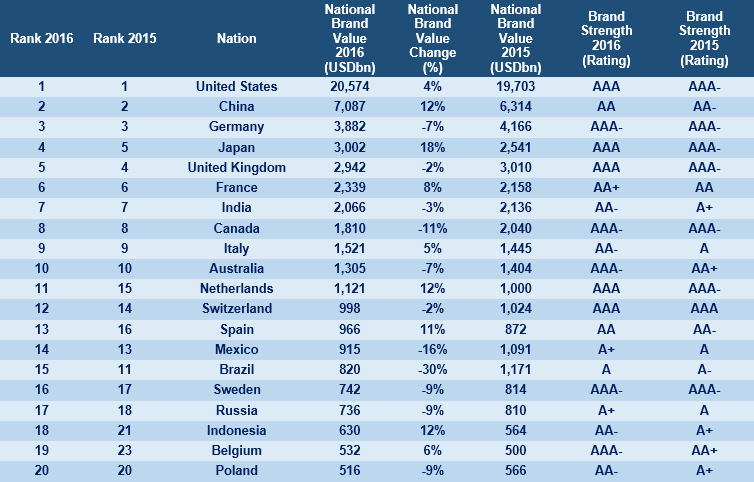 According to the report, Luxembourg is this year’s fastest growing nation brand, increasing its value by 43 per cent to US$85 billion (54th position).

“The Grand Duchy is attempting to rapidly shed its reputation for financial secrecy and more particularly the taint of impropriety left by the LuxLeaks scandal of 2014,” the report said.

“In its aftermath, Luxembourg initiated a concerted nation brand campaign to unify its messages and highlight the Grand Duchy’s strengths. reliability, dynamism and openness are highlighted as the country’s core strengths in a refreshingly low-key campaign that is distinguished by its focus on credible attributes rather than aspirations.”

At the other end of the scale, Jordan experienced the biggest decline in brand value of all the countries – down 35 per cent to US$24 billion – which the report said is a result of continued conflict in neighbouring Syria.

“As the World Bank reports, the security situation is deteriorating, affecting tourism, construction and trade,” it said.