Australian music streaming service Guvera has pulled all of its video ads based on customer feedback that they were annoying for customers.

“Brands love video ads, but we get very bad feedback from our customers about them. So we’ve decided to pull them,” said Herft. “It’s revenue for us and brands will pay us for that. Every video that we would serve, we would sell. We would substantially up our revenue if we put more video ads into what we do. But the feedback from the customer is ‘hey, we don’t like that’.”

Herft called on the example of YouTube’s pre roll advertising as one that is far from user friendly.

Herft said: “It’s disruptive, it’s annoying people. In its own right it’s been successful, it’s one way of serving ads but we’re looking at a different and better way where we’re not forcing things upon the consumer.”

“We don’t want to run ads that people are waiting to skip,” he said.

But Guvera’s war on ads doesn’t stop there. While users of the streaming service don’t find them to be as disruptive, the visibility of display and banner ads has also been reduced.

Herft said: “We’re a young company and we’re looking to grow. There are different aspects that we need to deliver to be able to grow. We needed some of those impression and display ads but we are reducing them now.”

Instead of plastering the site with banners, Guvera is looking at other ways to integrate advertising including branded channels with curated playlists.

“Brands have always wanted to connect with consumers through music but they’ve never really known how to do that properly. On one hand, digital has caused some of the issues in the music industry but it also opens up opportunities for brands.”

Herft is now successfully matching brands with audiences via the Guvera mobile app.

“We’re matching people with brands they actually like and they’re therefore choosing to engage,” he said.

Contiki is the first Australian brand to take up the initiative.

Contiki’s branded channel invites listeners to tune in to one of the playlists created by Contiki such as ‘Best of 2014’, ‘Day Songs’ and ‘Europe’s Hottest Dance Tracks’. The user can also browse various deals from the travel brand, look at news in the ‘newsletter’ section and link up with Contiki’s social channels. 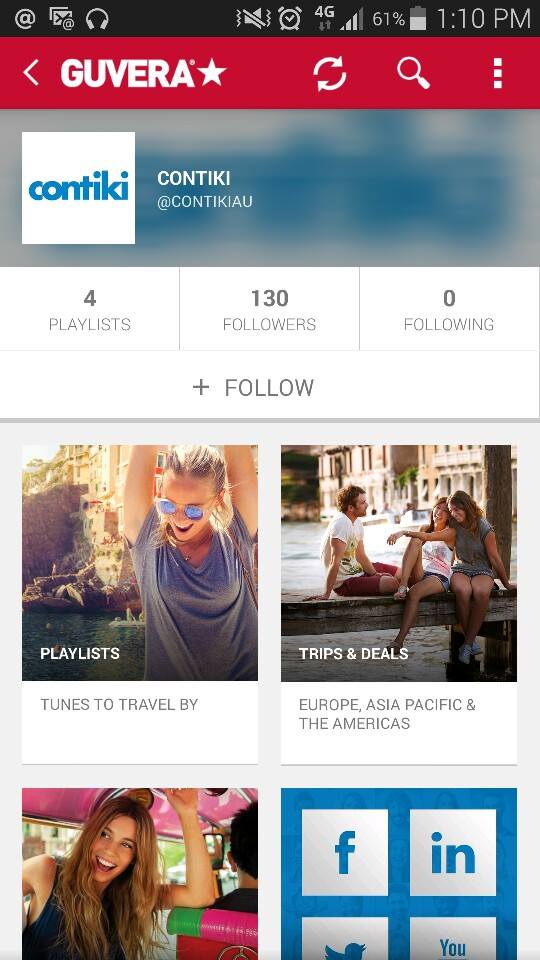 While the campaign is too fresh to share statistics, Herft says the results have been strong.

Online fashion retailer The Iconic is set to follow shortly.