Almost 80 per cent of Australians think there’s too much advertising and even in all that overload most of them are an load of old rubbish anyways.

That’s the findings of a new report by marketing and advertising agency Grey Group Australia in a study titled Eye on Australia. Read the full report here.

The Eye on Australia study found that brands were suffering in the eyes of Australian consumers and the fault for that lay squarely at the feet of brand’s ineffectual advertising and marketing and lack of story telling.

The main points of the study (the number of respondents was not noted) included:

• 79 per cent agreed with the statement that there was too much advertising in Australia.

• 78 per cent agreed that most advertising was forgettable.

• 73 per cent agreed that advertising can’t be trusted.

However, it was better news for brands overall. The findings concluded that:

• 62 per cent agreed that they trusted brands.

• 40 per cent agreed that you couldn’t actually tell most brands apart these days.

• 53 per cent of respondents agreed they were loyal to brands.

• 73 per cent agreed that brands were important to them and helped them judge the quality of a product.

• While 75 per cent said there were simply too many brands to choose from these days.

Interestingly the study found that word of mouth or advice from friends of family (56 per cent) was the most likely reason someone would choose a brand over another. Some 20 per cent said TV advertising was the chief reason for their decision-making while only five per cent were persuaded by radio advertising.

This graph details respondents’ top two influences on what products or brands they buy: 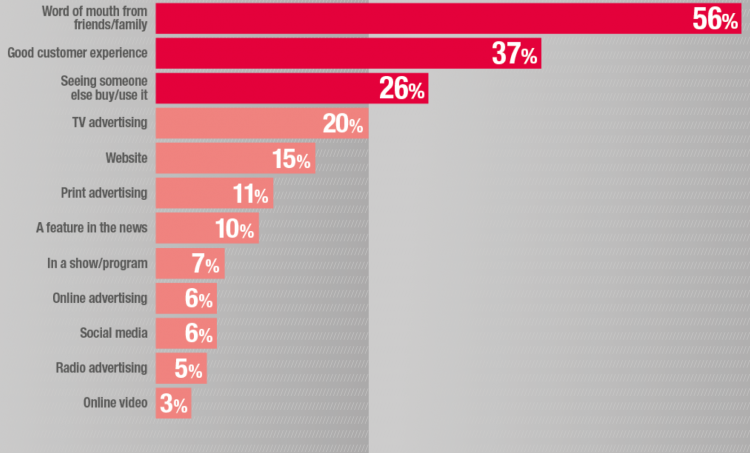 The other main things to come out of the report was that increasingly marketers needed to adopt a “story making approach” over a “story telling approach”. “Story telling” was when a brand creates and distributes content about itself while “story making” was the process of making other people or customers the storyteller.

Grey Group’s national planning director Danish Chan said: ““Technology has changed the way Australians consume media and run their lives. Continuously connected and always-on, Australians may be easier to reach but are tougher to influence.

“Advertising doesn’t work the way it used to. It can still be an engine of influence – but it needs to adapt,” Chan said.