It’s not everyday you flick the telly on, only to be greeted by a naked news presenter wearing nothing but a pink blazer and a freshly made-up face.

But when your numbers are down and the cash flow is waning, sometimes you gotta do what you gotta do.

And that’s exactly what Albanian TV channel Zjarr TV did, shaking up the conservative Balkan country by getting its female news presenters in a new, nude uniform last year, which the channel’s owner said has seen audiences grow exponentially.

“In Albania, where the news is manipulated by political powers, the audience needed a medium that would present the information like it is — naked,” Zjarr TV owner Ismet Drishti told AFP, per news.com.au.

“We don’t sell sex, we reproduce the news as it is. It’s both symbolic and good publicity,” Drishti added, explaining his plans to launch both French and English language bulletins with “bare information” of the same news variety.

And 24-year-old presenter Greta Hoxhaj told AFP the style has catapulted her into stardom.

“I worked hard for five years in local television where I remained unnoticed,” she said. “I regret nothing — in the space of three months I became a star.”

But now Hoxhaj’s ‘hard work’ has landed her an offer as a news presenter down under, Sydney in fact, on a soon-to-be launched channel, with a weekly paycheck of $4,590 – on the condition she keeps up the topless news reading trend.

“I have not decided yet, I’m still in discussions,” said Hoxhaj, per news.com.au. 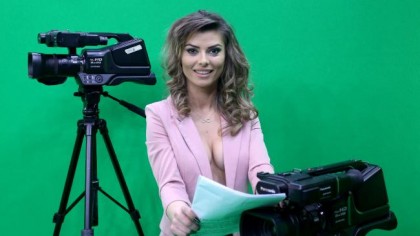 Prior to Hoxhaj, Enki Bracaj, a 21-year-old student, was the news anchor, who has apparently since scored a modelling gig after leaving the news channel.

But in a country where the population is largely Muslim, criticism has been rife.

“It’s pathetic to have accepted such a thing just to be on screen,” wrote one online critic, while another said the move was “outrageous” and “disgustingly sexist”.

Interestingly, the president of the Union of Albanian Journalists, Aleksander Cipa, told AFP that Zjarr TV’s naked news has done little to help traditional news mediums to buck the downward trend in both audiences and sales, despite what the channel’s owner says.

“Nudity cannot resolve the crisis in the media, which will serve anything to the public to survive,” he said.

Around the world, other news presenters have gotten their kit off for various broadcasts, including this Venezuelan who stripped to support her country’s success in the Copa America football championships, and French news broadcaster Doria Tillier who followed through on her vow to present the weather naked after France’s comeback to qualify for the World Cup.