Al Jazeera English (AJE) is launching its first-ever brand campaign; ‘Hear the Human Story’ which is rolling out across Australia, London and Johannesburg.

“From the very get go we recognised that human beings are at the heart of the stories. The story is about the people, not just about the decisions being made by governments,” said managing director of Al Jazeera English, Al Anstey.

“The campaign is about building reach and distribution and making sure we’re seen and heard and watched and read around the world. It’s also about building a reputation and that reputation is underpinned by integrity and balance. It’s a normal part of the evolution of any new channel – it’s a sign of progress. We want people to be aware of the core strengths of AJE,” said Anstey.

The face, or rather faces, of the ‘Hear the Human Story’ campaign are those of ordinary people. AJE made a conscious decision not to use one of its high-profiled journalists or presenters to head up the campaign.

One of the faces of the campaign is Kiki Katese, the Rwandan drummer who lost her family to genocide. To help survivors deal with the trauma, she started the first all-women drumming group. 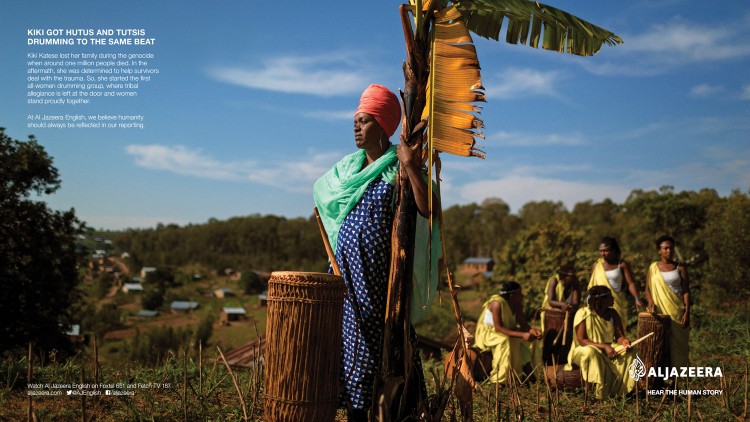 “They’re windows of the world, they’re a way of actually seeing how human beings are at the heart of a story,” said Anstey.

Anstey believes by AJE launching its brand campaign in Australia, there’s an opportunity to fill a gap in the market. He said: “In many senses what AJE provides is quite different, first of all because of the diversity of our people and the breadth and reach of our bureaus around the world. Our correspondents are able to see stories that aren’t on the radar of other news organisations. The underpinning philosophy of AJE is that we don’t see the world through any particular prism. We put every country in the world on a level playing field and evaluate the story on its merit. By doing that, we’re covering the developing world as much as the developed world.” 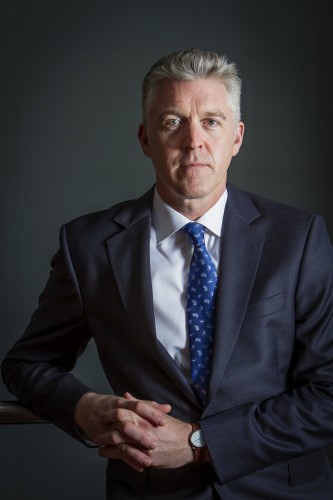 Anstey says the business drive for launching the brand campaign in just three places around the world is because “Australia’s such an important country to AJE in reaching potential audiences, London is our European hub and Johannesburg, we have a large bureau there”. He adds that the campaign will launch in other countries later on, but not all 130 countries that the network penetrates.

Anstey is almost evangelical in his belief that people inherently want to hear stories about other people – this is despite the self-consuming nature of social media and the amount of political conflict around the globe. He said: “Our ever increasing viewership figures and the engagement we have with audiences right around the globe speaks for the fact that people connect with people.”

Anstey believes the full story of politics and war can only be told through the people affected by such occurrences and he refers to the support garnered from the global #freeAJstaff campaign that started when Australian journalist Peter Greste and his colleagues Mohamed Fahmy and Baher Mohamed were sentenced by an Egyptian court to more than seven years in jail for allegedly “defaming” the country.

“More than 150,000 people have been active, calling for the release of these innocent people who shouldn’t have spent even a second behind bars,” said Anstey.

In measuring the audience engagement of the news service, Anstey says in a ‘new media’ sense it’s “quite easy”. He added: “It’s the number of people feeding information back, or commenting on what we’re doing or finally, being involved. We have a program called The Stream which sets its agenda on the conversations taking place on social media.”

“It’s about the quality of engagement as much as the quantity.” Anstey admits it’s hard to effectively measure the network’s reach when it spans 130 different countries around the globe, all of which access news via different platforms. “Some countries are still very much reliant on television for their news, while others have access via all kinds of devices.”

AJE is closer to a traditional news broadcaster than say your VICE news, but Anstey said the network is capable of riding the volatility underpinning the media industry, so long as it protects its journalists and adapts to the technical changes underpinning the industry. “There’s an ever-increasing challenge to journalists in terms of their safety. With so many people around the world wanting their story to be told, journalists are becoming a target. Above and beyond that, the world is changing so incredibly fast, when we first launched, TV was still king. Now, we’re platform agnostic. We’re a multi-platform information provider. People who value content will come to all the different platforms that they have access to. We need to ensure we’re giving the right people the right content at the time, place and on the device of their choosing,” he said.

The campaign, ‘Hear the Human Story’, is being rolled out across print, digital, TV and radio.