It was only 20 short years ago – 18, in fact – way back in 1997 when News Corp attempted to buy the rights to the NRL in what became known as the disastrous Super League era that came close to destroying the game.

Fast-forward to 2015 and it’s abundantly clear the Murdoch clan have swapped allegiances and are now fair-square in the AFL trenches. And the Australian football codes will never be the same again.

Yesterday’s announcement that News Corp and its pay TV subsidiary Foxtel had lashed-out $2.5 billion for the rights to the AFL until 2022 was not only the biggest sports rights deal in Australian history, it was a clear “f@ck you” to the NRL and Nine’s David Gyngell who’d jumped into bed together last Monday for a similar time and all for the (now paltry sum of) $925 million.

As reported by B&T; News, the Murdochs, Foxtel, Ten and everybody else left out of the Nine/NRL deal announced last week were beyond livid and got their revenge yesterday. And in spades.

News is reportedly so furious about the NRL deal it has already threatened to turn its league-loving tabloids in Sydney and Brisbane – The Daily Telegraph and The Courier Mail – into proxy AFL mouthpieces. Although, how you’ll convert league-infatuated audiences is an entirely different matter altogether and any move could seriously backfire on already struggling print circulations. It could also prove very good news for the unaligned Fairfax Media.

That said, on yesterday’s announcement – that included Rupert himself perched at the press announcement of the mega deal – News organs were already trumpeting that “Aussie Rules” would be “his company’s preferred choice among the nation’s codes”. 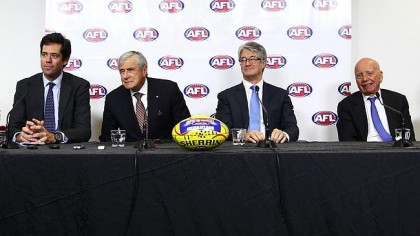 To show that the great man and News patriarch, Rupert Murdoch, was not only pissed being ignored in the NRL deal he fronted yesterday’s $2.5 billion announcement to declare that his media organisations had “always preferred Aussie Rules”. A strange summation indeed considering most of his print and websites in NSW and Queensland virtually ignore the game entirely. And, of course, 1997’s ill-fated Super League fiasco.

“We’ve always believed this is the premium code in Australia – it’s the national game,” Murdoch said, although no journalist in the room probed the 84-year-old on the words to Up There Cazaly.

“We’re also committing all our platforms to support the AFL in every state.

“We believe in the strength of the game and we’re doing everything we can to make it stronger,” he continued in what many may see as a veiled warning that he’s very determined to see league become a very second-tier sport in this country,” Murdoch said.

Yesterday’s monster deal – which the AFL has already admitted it may have trouble spending – will see Foxtel, Seven and Telstra each air games. Free-to-air network Seven will reportedly get at least three live games while the AFL has already said it will go head-to-head with Nine if it attempts to broadcast live NRL games in its AFL heartland.

It has also been reported that the AFL Grand Final will now be held on a public holiday in Melbourne.

Despite snaring close to a billion in the Nine deal, the NRL is yet to secure a pay TV deal with Foxtel. It is believed that league bosses want $800 million-plus over the four years (or even more now the AFL deal has been announced); however, the News-owned Foxtel may be reluctant to spring that for three reasons. One: it got ignored in the NRL deal. Two: Nine has stitched-up many of the live games and all the digital streaming rights. Three: the Foxtel coffers aren’t likely to be bulging following yesterday’s AFL announcement.

The NRL may not have got the best deal, but it appears its fans will be less likely to have to pay to watch games. After all, when someone springs $2.5 billion then someone has to pay for it! And if it’s not advertisers then it will be pay TV subscribers.