Oh dear. ABC opinion website The Drum has learnt the hard way just how important it is to crosscheck who you’re tweeting about.

The Drum’s conundrums began when the @ABCthedrum began tweeting about the Heart Foundation’s decision to can the infamous 20-year-old ‘tick’ that reassures us what we’re eating is healthy.

But sadly, The Drum didn’t tweet @heartaust – the correct Heart Foundation Twitter account – it tweeted @heartaus, which as it turns out is the account of ‘Love Aussie C*ck’, and if you search the name, you’ll find some less than suitable for work photographs on there, that’s for sure. 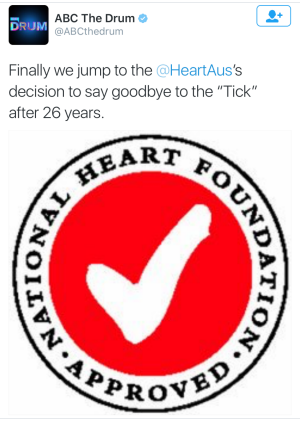 The ABC’s rogue tweet was deleted on Wednesday morning.

Now, Liberal senator Cory Bernardi, who properly ballsed up last month after attributing a quote from an American neo-Nazi charged with child pornography offences to French philosopher Voltaire on Twitter, was having a field day over the error.

“Of course it is easy to make mistakes on Twitter, which the ABC seems to relish in politicians,” he said, per Fairfax reports.

A spokesman for the ABC told Fairfax that the broadcaster had protocols in place for appropriate use of social media and that “it’s an unfortunate mistake and obviously the intent of that social media account was clear”.